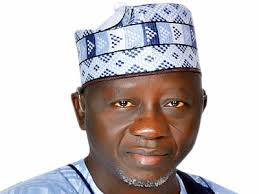 Members of the Nasarawa state House of Assembly, desperate to impeach the state governor, Alhaji Tanko Al-Makura, have frozen the account of the state government.
Of course, they absolutely do not have the authority/power to freeze the state government’s accounts. These law makers are lawless and are silently inviting anarchy into the land. If the military throws their dumb asses out of office as a result of their lawlessness, some ignorant Nigerians will start mouthing off on the military overthrowing an elected government. Who needs an elected government that does not follow the constitution?
These dumb legislators asked the state Chief Judge (CJ) to constitute a judicial panel to look into the allegations of official wrong doing that they leveled against the governor. The Chief Judge complied, but like little bratty senseless children, the same law makers are not satisfied with the panels membership, even though the constitution gives them no role or authority to question the constituted panel. Then, like stark illiterate motor park touts, they demanded of the CJ to disband the panel, without indicating under what authority they could make such a demand and under what authority that the CJ could honor their illegal demand.
Are these legislators really this much stupid or they are merely playing games? Either way, they are unfit and disgraceful to democracy.
I hope that the sanctimonious-sounding Nigerians who lament the death of “a democratically elected government” are watching these abuses of the wishes of the people of Nasarawa state by “elected civilians.”
Nothing in the constitution says that civilians are at liberty to violate it or that their simple minded supporters should be taken seriously for lamenting the civilians removal from office (by soldiers) if they violated the constitution. Preventing soldiers from coming to power starts from the elected civilians following the law. They are not following the law now and I smell 1983. Period! [myad]