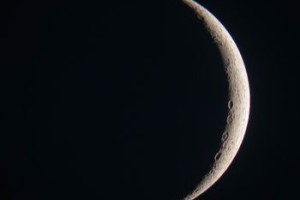 The announcement by the Nigerian Supreme Council for Islamic Affairs (NSCIA) that no moon was sighted on Friday evening, and that Ramadan would complete 30 days was met with mixed reactions.
The truth is that before anyone goes westwards to sight the moon, such a person must arm himself with some basic facts.
The person must know the sunset and moonset times for that day. He must know if the moon will set before or after sunset . If possible he or she should know the exact time for the Conjunction (literally, birth of the new moon)
The young crescent that is sighted in the west must have stayed at least several hours (sometimes may be up to 23 hrs) from it’s birth. A newly born moon (which is invisible to anything you can think of) is what is called the Astronomical new moon. The exact time of the moon birth can now be calculated based on some formulas/algorithms and these calculations are accurate to the nearest minute!
A young crescent is usually sighted after sunset usually several hours after the newly born invisible moon. It can’t be seen before sunset, the sunlight will obscure it. One of today’s sighting claim (from Zamfara) was said to have been rejected because the person said he saw a crescent at a time that was some minutes before sunset!
When a moon is born, it must meet some criteria before it is visible to the eye or even a telescope. The moon must be separated from the sun by angle of at least 8⁰ for it to reflect adequate sunlight before it can be sighted on earth.
Secondly the moon must be at least 5⁰ above the horizon (above the sun) before it’s visible.
The above criteria coincided with a moon age of at least 15 hrs after birth. Mind you even a 21 hr old moon may not be visible if the elongation is less than 8⁰!
The record for the youngest Moon ever seen with optical aid was 11hours 40mins goes to Mohsen G. Mirsaeed of Tehran who saw it on September 7, 2002.
The youngest crescent ever seen by the naked eye was 15hours 32mins from it’s birth observed by Stephen James O’Meara in may 1990.
In Nigeria, the moon of Shawwal was ‘born’ at 6:36pm Kano time (ie time of Conjunction) and this same moon was to set at 6:40. This is about 4 mins before sunset.
How can anyone claim he saw a 6 mins old moon that was going to set before sunset? Even the most powerful telescope cannot achieve this talkless of human naked eyes. There’s nowhere in the world where visibility criteria were met. This made sighting difficult.
For today’s sighting claims, It could be one of the so many things people mistakenly think as the moon. In our times, there are numerous man-made flying objects, helicopters, air-planes, and satellites, that sometimes reflect sun light in such a way that people take it as a moon. A piece of c-shaped thin streak of cloud, a jet-smoke, or even a small piece of hair stuck to eye-glasses has been considered the Hilal by many sincere Muslims. Sometimes, the zeal of sighting, brings shear imagination that the person thinks (s)he has seen the moon.
And finally Nigeria’s criteria for declaration of the beginning or end of lunar months is based mainly on sighting except for month of Dhulhijja when we rely on Saudi.
Let us examine the conjunction (in Makkah) as a possible basis of starting a month. Remember, the conjunction can occur at any time between 24 hours. Suppose the conjunction occurs at 11pm GMT (Sunday), then at that moment Makkah time is 2am (Monday). Should England start the month on Monday and Saudi Arabia start the month on Tuesday?
Now, if someone says that let us make Makkah as our basis and whatever day in Makkah, the conjunction occurs the next day the new month starts. The problem with this is that if conjunction occurs at 0:01am (Monday) of Makkah time then at that moment it is 2:01pm (Sunday) in Hawaii. Should Hawaii start the month on Monday and Saudi Arabia start the month on Tuesday?
Look at another case: Suppose the conjunction occurs at 11:59pm (Sunday) Makkah time then at that moment it is 5:59am (Monday) in Tokyo. Should Japan start the month on Tuesday and Saudi Arabia start the month on Monday?
If someone says, ignore what time it is in other locations of the world, just go by Makkah time, then why do we have different prayer times for every city? Why not adopt Makkah Prayer Time all over the world. In essence Nigeria is not ‘following’ Saudi in this case. It just happens that the moon cannot be sighted in Saudi or Nigeria.
We can call it a coincidence of fate!

Dr. Umara wrote in from Abuja.