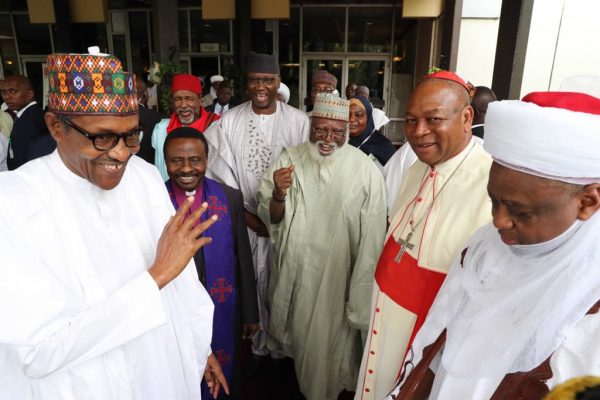 The conclusive Osun election and the choice the people is an eye opener to the ongoing debate on the Muslim-Muslim ticket of the APC presidential flag bearer.

It is much easier to express the singular force behind the attempt to discredit the APC’s decision and stoke up sentiments against the party. The same elements of the society, CAN, the PDP paid influencers, and others who have been quite busy making dangerous religious and regional issues out of a mere politically calculated strategy of a party, were all relatively at ease with the same religious leadership combination in Osun state. The issue was not raised for once, nor discussed at any fora, not even from the Muslim society; because, it was all grandly accepted that what the state needed is a leadership that would perform and deliver the dividends of democracy to the people of Osun State. The Muslims and the Christians alike, all lined up behind an all-Christian ticket. We should take it from here; it is time the national argument ended and we begin to concentrate on the factors that are important and beneficial to our collective growth and development as a nation.

Much ado about nothing? Was the Osun case not similar to that of APC that has become a lingering uproar generated by the APC Muslim-Muslim presidential ticket combination? In our characteristic intolerance along thin lines of religious and regional dichotomy, and to fan the embers of political control to amaze electoral support, we have intentionally, and for the purpose of achieving selfish and political goals, equated a politically calculated strategic ticket to a declaration of religious war.

Abandoning the more damming emergence of Atiku Abubakar as the presidential candidate of PDP as against the overwhelming conclusion of the entire Southern Nigeria to produce the next president of the country. The region has come to accept the deception and disappointment and is getting set to even defend the attack on its capacity to produce a president by the party they dole on, but hypocritically, would create an unending narration of an APC Muslim-Muslim ticket as an attack on the sanctity of their faith, relevance and a united Nigeria. They saw nothing wrong in PDP having a Northern presidential candidate despite their perennial cries for equity, because it is PDP, but would cry wolf about APC’s strategic Muslim-Muslim combination to win election.

Though, it is not surprising that the mere political calculation of a party and a presidential candidate whose sole consideration for the choice made is to appeal to targeted voters demography and win elections; but has been weaponised into a dangerous rhetoric of war of faith that is been propagated at the speed of light across the length and breadth of the country and even beyond. For decades, religion has become a central political instrument that politicians keep using to their selfish advantage to partition the citizens into opposing ends and create their much needed electoral support base. We have gone backward more than we develop forward because we value the support we accrued on the back of division more than the unity of purpose on the back of mutually benefiting values for the people and the country. From 1960, and till now, we have won elections on the back of putting the people against one another, not because of their support for positive manifestos or precedential performance of the contestants, but on the strength of in-fighting to preserve our religious faith, tribal relevancies and regional recognitions.

Today, and as we draw closer to 2023, the most worrisome development for us as a nation would remain the fact that in our over fixation on religious and regional considerations as determinants of leadership virtues, we have totally lost focus of what are at stake for us as a people and a nation; at a time when we should be busy objectively scrutinising the antecedents and capacities of candidates vying for political offices, we are busy playing religious and regional games and setting up the country for a further derailment along the duo.

Where is the noise about the Muslim-Muslim ticket coming from? Who is masterminding it? A church that has failed the country in providing a standard for morality, but rather becomes utterly commercialised to the point that it has become more of appendages of some political party and a celebrated site of corruption; or the tribal egoistic elements who are bent on using all possible weapons to drive  home tribal agendas. It was in this same country that Chief Obafemi Awolowo ran with Chief Umeadi; not only both Christians but also both Southerners. It was here in Nigeria that Dr. Nnamdi Azikwe, a Christian picked Prof. Ishaya Audu, also a Christian as his running mate. Aguiyi Ironsi and Babafemi Ogundipe ruled this country on an all-Christian ticket, and yet all was well with the country. Let us not also forget that the Buhari-Idiagbon Military rule was an all-Muslim rule and there was no disapproval from any quarters then.

This level of hypocrisy and bigotry would not help us as a nation; they only separates us more and deepen our disunity. We do not need elements within us who have become committed to serving their personal interest at the expense of delicate cords holding the country. The same people who midwife the

same-religion-tickets across their state, and saw nothing wrong with it, would suddenly become the arrow head of attacks against the APC’s same-religion-ticket without any shame. The likes of Aisha Yusefu who vigorously campaign for a Christian-Christian ticket of Obaseki and Philip Shuaibu in Edo state that boasts of a little above forty percent of its population, would today, blast the social media with the wild allegation of the attempts by APC to Islamised the country via a Muslim-Muslim presidential ticket.

Wouldn’t we ask the question: if PDP or any other party had picked a Northern Christian as its presidential flag bearer, and needs to pick a running mate from the South-East, would they have picked a Muslim from Enugu or any of the South-East states to evade a same religion ticket; or rather, go the way that would guarantee them the votes of the region?  No reasonable party or presidential candidate who wants to win at the poll will give out his vice-presidential aspirant ticket on the basis of religion to a candidate who would exert no influence over the votes of his or her region. It is a known fact in Nigeria that the block northern voters would rather vote for a Muslim ticket, while the Southern people would prefer to vote for a Christian ticket. As unwholesome as the reality is, it remains that as at now, religious sentiments apart, Tinubu picking a Northern Christian running mate would have been the end of his aspiration even before the game started.

I watched the events as they unfolded; all the way from the emergence of Tinubu as the APC presidential flag bearer till the decision of his running mate. Firstly, I saw the handwriting of the opposition party on most events as they orchestrated the media to draw support for the disqualification of the man from the primary, using age and health to stoke away support for his candidature while at the same time were busy expending their resources to support the emergence of any other candidate but Tinubu. It was the same game play when the time for him to pick his running mate came; PDP knows all too well that Tinubu is a hard bone for them to crack and his combination with a strong Muslim candidate from the core North would literarily skew the context more in his favour; and the jittery opposition party has been struggling, using all instruments of propaganda to limit the damage the choice of APC is making to their aspiration to return to Aso Rock.

Our challenge as a people and a country today is not a Muslim-Muslim ticket, but the increasing population of our citizens and groups who are bent on polarising our system along very dangerous lines. The increasing number of religious leaders who benefit more from unstable developments in the nation; who prefer to anchor their supports as appendages of a particular political party and would go all the way to destabilise the system in favour of their preferred party and candidates. The very people who despite the recorded atrocities of PDP would never see or complain about the party have abandoned their calling to turn their pulpits and altars to political platforms to attack one party while drumming support for another.