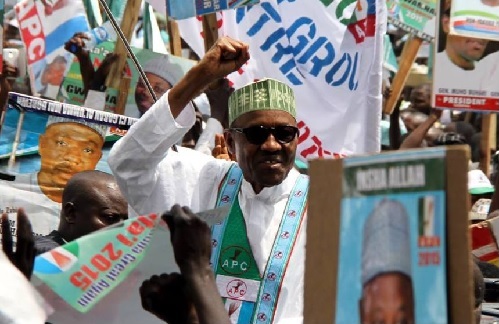 Going into the February elections, Nigerians are deeply divided along tribal, ethnic and religious lines. More than any other ruler in the chequered history of Nigeria, President Goodluck Jonathan has worked very hard to amplify the differences among Nigerians. He had done tremendously to make us realize that we are not of the same tribe, tongue or religion. He had invested handsomely in reifying the divisive tendencies that undergird the Nigerian nationhood such that the coming election is coming with fearful promises of deepening the schisms, the divides and possibly leading to the disintegration of the country. A sneak preview into the embarrassing campaign of President Jonathan and his PDP reveals this scenario. When Nigerians feel that a president that should leverage on whatever are the achievements he wrought with a six years unprecedented oil windfall (the highest in the history of the country) to advertise his competence for additional tenure, all they get are mudslinging, character assassination, muck raking, blackmail, abuses, fabrication of lies and incendiary hate propaganda against their main challenger, General Muhammadu Buhari.

But then, elections, for ruling parties, are about giving accounts of stewardship and tapping on that to seek for elongation. For a ruling party, election time is time for testimony of the good things it had done and the need to trust it with more time to do more. But Nigerians are not getting that from Jonathan and the PDP as they strive so desperately to parry our attention from the most critical question of how well they have managed our affairs in the last six years. Where we would have been told (even as we don’t experience it) how our lives had been improved by the government, we are fed with tons and tons of hugely fabricated lies and insidious propaganda against just one man.

When Nigerians expect fruitful results from the providential oil windfall that has blessed the six years of Jonathan, how he will work to improve the pallid state of the country under his insipid watch, all they get are unflagging abuses, character assassination and woeful resort to throwing brickbats at their main opponent. Most importantly, Jonathan seems to have invested so much in driving knives of hate and intolerance among the country’s Christians and Muslims, among Southerners and Northerners and thereby precipitating a conflagration among Nigerians, having realized that the probabilities of his retaining power is practically gone.

But there is no escaping the sordid underpinnings of the Jonathan presidency however it tries to divert our attention. Recently, Charles Soludo, the former Governor of the Central Bank made a startling revelation that a huge N30 trillion has been stolen from the country’s treasury during Jonathan’s tenure. This only followed the yet to be resolved revelation by Soludo’s successor as CBN Governor, Emir Lamido Sanusi that $20 billion was diverted from the country’s treasury and also the bombshell from former President Obasanjo that the foreign reserve he built up in his eight years has been completely depleted. These are just infinitesimal bits of the In the face of these hair-raising revelations by those that should know, Nigerians are getting poorer to the extent that the country is on the verge of becoming the country with the highest number of poor people in the world, infrastructures continue to decay, standard of life continues to plummet, life expectancy is on such a free fall that the respected Economist Magazine wrote that Nigerians die eight years younger than their counterparts in poorer Ghana! Public power supply has dimmed considerably from where Jonathan met it despite the fact that billions of dollars have been poured into it, our health sector survives as an expansive mortuary as the death rate continues to expand, and hunger, disease and want ravage millions of Nigerians to no end.

Also, corruption and stealing of public resources have become integral parts of government. Jonathan insists that stealing is not corruption and maintains that he will not send corrupt people to jail. This has been the well exploited license that has opened the huge resources of the country to free pillaging as the Jonathan regime feels satisfied celebrating the corrupt beneficiaries of its quaint predilection to Byzantine corruption as the hallowed fruits of his paradoxical economic growth. Nigeria under Jonathan is bankrupt today as a dip in oil earnings has wrecked the states and ensured that states and even the federal government owe workers’ salaries for several months. Today, and despite the gloating of a booming economy, Nigerians are hungry, angry, frustrated, demeaned, agitated and edgy, as Jonathan presents himself for re-election.

In its latest editorial dedicated to the coming February General election, The Economist has this to say of the Jonathan government;

“Start with Mr Jonathan, whose People’s Democratic Party (PDP) has run the country since 1999 and who stumbled into the presidency on the death of his predecessor in 2010. The PDP’s reign has been a sorry one. Mr Jonathan has shown little willingness to tackle endemic corruption. When the governor of the central bank reported that $20 billion had been stolen, his reward was to be sacked.

“Worse, on Mr Jonathan’s watch much of the north of the country has been in flames. About 18,000 people have died in political violence in recent years, thousands of them in January in several brutal attacks by Boko Haram, a jihadist group that claims to have established its “caliphate” in territory as large as Belgium. Another 1.5m people have fled their homes. The insurgency is far from Mr Jonathan’s southern political heartland and afflicts people more likely to vote for the opposition. He has shown little enthusiasm for tackling it, and even less competence. Quick to offer condolences to France after the attack on Charlie Hedbo, Mr Jonathan waited almost two weeks before speaking up about a Boko Haram attack that killed hundreds, perhaps thousands, of his compatriots.”

This is just a summation of the damning international opinion on the Jonathan government, which goes like this;

British Newspaper, The UK Guardian, writes on the president’s corruption record,“Jonathan’s record on corruption is a disgrace”.

Former US presidential candidate and Senator, John McCain speaking on the Chibok girls said, “We shouldn’t have waited for a practically non-existent government to give us the go-ahead before mounting a humanitarian effort to rescue those girls”.

According to the US State Department, “Massive, Widespread and Pervasive corruption affecting all levels of government under President Jonathan”.

The local opinion is more damning and forms the preface for the February 14 election. This is the kind of indicting scenario Jonathan and his PDP are trying desperately to run away from and what better way to do that than to go personal and divert discourse and election campaigns to banalities with liberties to sell lies and falsehood and hoodwink unsuspecting and ill exposed citizens? What better way than to indulge in infantile trading of lies, mischief and inanities as a campaign manifesto? For this dirty job, PDP and Jonathan have gathered a hefty cache of jobbers when they should have gathered economic, political and governance experts to drive their campaign. With the huge resources salted from the treasury, the PDP has bought off the entire media; print, electronic and online with a singular mission to engage in lies, blackmail, forgeries, haul dirt at their presumed nemesis, Gen. Buhari and these are over working themselves to earn their illicit commission. Sadly for them, the more they engage on these dirty campaigns, the more they mobilize Nigerians on the great need to rusticate them on February 14.

A sample; Few days ago, AIT, a station committed irrevocably to the corrupt interests of the PDP did a very dangerous documentary with the sole purpose of generating lies and evil propaganda to tarnish the image of Buhari. The documentary was meant to put a final seal on Buhari and for this, AIT smiled to the bank. After repeatedly airing this one hour documentary for some days, AIT opened an online poll to gauge how well its hate mission has sunk with Nigerians. Lo and behold, Buhari so roundly trounced Jonathan in the poll such that 79 per cent voted Buhari while a paltry 19 per cent voted Jonathan! Embarrassed and roundly humiliated at the failure of its mercenary job, AIT pulled down the poll, making a face saving claim that some people hacked into its site!

What is becoming so obvious to the PDP and Jonathan presidency is that the more they sow lies and falsehood to arrest the soaring Buhari candidacy, the more Nigerians get mobilized around him as a panacea to the continued decay and rot that have pockmarked PDP’s years in power. As it stands today, the coming election has been called for Buhari by Nigerians that refuses to buy PDP’s jaded market of mudslinging as a campaign tactics. The expectation is that given the rancor and division the PDP has slyly sold in Nigeria, a Buhari presidency should start working on a untive template to weave Nigerians from every tribe and religion together again, heal the fractures that have been inflicted on the Nigerian state and lead the country to recovery from the blisters of the present. What we have presently is a fruit of total failure of leadership as exemplified by Jonathan’s six years of failed leadership. It behooves the coming leadership to hit the ground running as soon as it is elected and mop up the strains the PDP has brought to bear on the structures and people of the country.