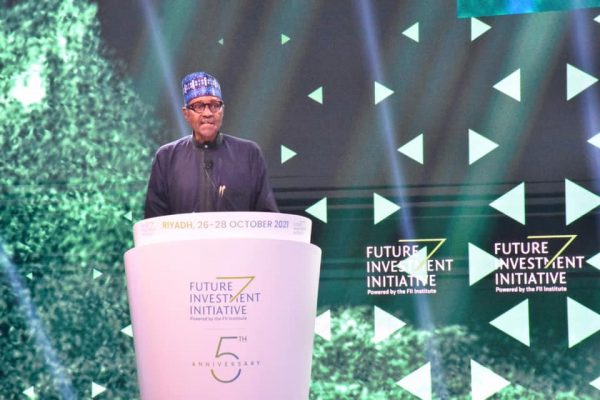 President Muhammadu Buhari had a very successful visit to the Kingdom of Saudi Arabia, the high which is the symbolization of our mutual trust and resolve to combat climate change, improve trade and promote investment in humanity, not profit as a motive.

It was also an opportunity used by the President to reassure the global investment community on the question of security which is of utmost significance to anyone wishing to bring their money here.

Addressing the 5,200 participants at the 5th Future Investment Summit, FII called by the Saudi Arabian Monarch and Custodian of the Two Holy Mosques, King Salman Bin Abdulaziz, the President gave the most important assurance his large audience-physical and virtual in attendance- wanted to hear: “security is our most important priority. It’s the bottom line and common sense. It is up to us to secure our country and we will do it.”

To President Buhari, growing social unrest and insecurity are products of inequalities and unfair policies that exclude the majority from opportunities for participation, admonishing world leaders and global investors to prioritize inclusive and humane policies.

He then went on to list a litany of things going for the country: we are the largest on the continent in the economy and population-a people driven by aggressive competitiveness.

He had on the entourage retinue a of Nigeria’s successful business leaders including Aliko Dangote and Abdulsamad Rabi’u, included in the top ten ranking of Africa’s richest.

As an aside, it interested many seeing Abdulsamad and Dangote arriving together and leaving on the same aircraft. They shared the same hotel and same car throughout.

This was contrary to the public perception of the relationship between the two business moguls.

On the Government side, the President was supported by the Ministers of Trade and Investment, Communications and Digital Economy-the nation’s fastest-growing sector with a record contribution of two trillion Naira in a year from almost nothing in the past-and the Ministers of State for Foreign Affairs and Petroleum.

The Saudi’s made it clear from their invitation that they were impressed by President Buhari’s last outing at the summit and had hoped that this same spirit will reflect in this year’s event.

The President, indeed Nigeria was honoured by the organizers in making our country’s leader to be the first Keynote Speaker at the prestigious event anchored by two of CNN’s leading finance, business and investment analysts’ cum-reporters, Richard Quest and John Defterios.

Taking a cue from the theme of this year’s summit, President Buhari presented an address titled: “Investing in Humanity: The Nigerian Perspective.” Of course, he had a strong statement to make here. Not only is this in line with his personal philosophy, fact is that investing in humanity is all that his government has been doing.

It’s the angle from which all decisions of government are taken. For him, therefore, this was a most befitting platform to tell the world what his country has been doing.

In that speech, he mentioned that:

“Investing in humanity is investing in our collective survival. This is why in Nigeria we believe that public and private partnerships should focus on increasing investments in health, education, capacity building, youth empowerment, gender equality, poverty eradication, climate change, and food security. By so doing, it will go a long way in reenergizing the global economy in a postCOVID-19 era.

“Nigeria’s population today exceeds 200 million people. Some 70 percent are under 35 years old. When we came into government in 2015, we were quick to realise that long-term peace and stability of our country is dependent on having inclusive and humane policies.

“In the past six years, our government took very painful but necessary decisions to invest for a long-term prosperous future knowing very well that this will come with short term pains,” he added.

The President took a look at global challenges, past and present and warned thus:

“We cannot invest in humanity without relieving our countries from the crushing effects of the debt burden especially when the COVID-19 pandemic has increased the risk of deepening the debt portfolio of poor countries.

“These nations increasingly allocate more and more resources towards external debt servicing and repayment at the expense of the health, education and other services that contribute to the overall wellbeing of their population,” he said.

Describing the summit as a credible forum for interaction between the public and private sectors, to explore ways of advancing economic growth, development and global prosperity, the President said Nigeria’s diversification efforts continue to yield results, particularly in agriculture.

On the important government policy of Climate and the place of Public-Private Partnership, the President noted that climate change has triggered conflicts, food insecurity, irregular youth migration, rising level of sea waters, drought and desertification, as well as the drying-up of the Lake Chad.

“In the Lake Chad Basin region, where Boko Haram insurgency continues to undermine the peace, security and development of the region, climate change is largely responsible for the drying up of the Lake Chad which has shrunk by more than 85 percent its original size.

“The diminishing size of the Lake is at the root of the loss of millions of livelihoods, displacement of inhabitants and radicalization of teeming youths in the region who are recruited to serve as foot soldiers in the insurgency.

“In order to redress this situation and restore the lost fortunes of the Lake Chad Basin region, strong public-private partnership through massive investments will be needed to recharge the waters of Lake Chad. I am confident that this forum will rise to the challenge in the interest of durable peace and sustainable development of our region.”

The President’s meeting with Nigerians in the Diaspora gave him an opportunity to send an important message to Nigerians on his unbending determination to respect the Constitution at all times and on all issues.

Not only did he restate his determination to leave office at the end of his tenure in 2023, he followed up with a warning to would-be campaigners, in case there are some who are contemplating this, that he will not undermine the law of the land by extending the tenure of office and that nobody should start doing this nonsense.

Apart from the usual homily to Nigerians to respect the laws of the counties in which they reside, the President threw his weight behind the clamour for the incorporation of new technologies in the election process.

He was blunt with the fact that without technology in the 2015 election, the Electronic Voters Register and the Card Reader, he may not have won; that he could have been schemed out or ought rightly cheated of his victory by the governing authorities as did happen on three previous elections 2003, 2007and 201.

“With this innovation, they could not defeat me on the altar of money and fraud.”

The President also narrated a story familiar to many Nigerian families, in which members dared the desert and walked their way to the Holy Land for the pilgrimage.

They traded on the route, served as farmhands and the skilled among them earned upkeep as they trudged on for years before getting to their destination.

Millions of these made these journeys as millions of others failed to make it, by either losing their lives or choosing to settle down as migrants in countries on the way.

“My uncle” whom he named as Hussaini “undertook this arduous journey but died in Sudan in the homeward stretch,” said the President.

An important point he made of this, was that these earlier generations built the strong bond of relationships between our peoples and nations and the present generation must do nothing to derogate from the existing cordiality and friendship of our two states.

President Buhari’s trip to Saudi Arabia focused mainly on marketing Nigeria and developing a positive image for the nation. From all intents and purposes, the objective has been achieved.

Garba Shehu is Senior Special Assistant to the President on Media and Publicity.

May Prosperity Be Your Portion, Saudi King Wishes Nigeria