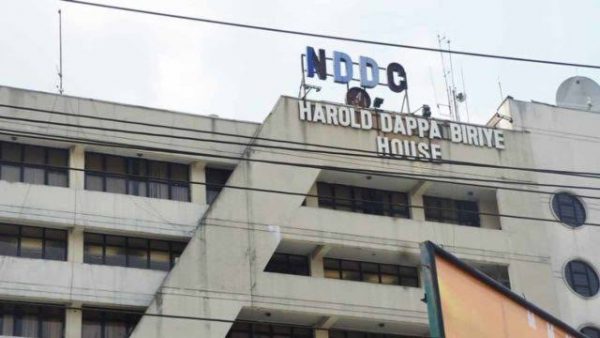 The Niger Delta Development Commission (NDDC) has been asphyxiated. It is out of oxygen. It now runs on the noxious gas of corruption; its usefulness outlived and outpaced by fraud and mindboggling moral and financial depravity. The agency is a convincing argument against the mushrooming of regional commissions which end up becoming cash machines of a few.

What is happening in the NDDC is a big whale feast — with indiscriminate and soulless butchering of the agency’s treasury. Nigerians in the Niger Delta asked for development, but they were sectioned to endure pauperisation and the purloining of their patrimony. They asked for guardians of the public till, but they were handed hunters of the common wealth.

The NDDC was established on June 5, 2000 as a response to the agitations of the Niger Delta for development. But despite the huge chest of resources allocated to this commission over the years, it has failed prodigiously to bring the barest minimum of development to the region.

With an annual budget of about N300 billion, the NDDC has nourished the flatulent entrails of the behemoth of sleaze while the region it was meant to take care of atrophied.  There is perhaps no agency of the government that has remained unaccountable and opaque with its operations like this commission.  The agency is the proverbial ‘’regional cake’’ where governors from the south-south and other interests ogle to take a slice.

The Niger Delta is one of the most disadvantaged regions in the country in terms human, infrastructural and material development. Less than 30 percent of the natives have access to clean water. Poverty blooms in the villages and creeks which are marooned from any form of modernity. The region plods away in illiteracy and disease as basic sanitary system, schools and health care are only a pipe dream.

This is a region which is the breadwinning spouse of the country. 90 percent of the country’s revenue comes from the region. Between 1965 and 2000, Nigeria earned over $350 billion from crude oil – according to the International Monetary Fund. Also, an audit report by Nigeria Extractive Industries Transparency Initiative (NEITI) in 2018 showed that Nigeria earned as much as $677.9 billion in 18 years, between 1999 and 2016, from the sale of crude oil.  But why is the country’s goose hungry; raped and tortured?

See also:  Lekki Massacre: Fake News, Anarchy And The Rest of Us, By Yushau A. Shuaib

I must say, the Niger Delta is a victim of its thieving elite who appropriate and expropriate resources meant for the people to themselves. The region must, as a matter of urgency, rejig and nozzle its agitation to the enemies within.

In October 2019, President Muhammadu Buhari ordered a forensic audit of the operations of the commission from 2001 to 2019. He said the current fortunes of the Niger Delta do not justify the vast resources that have been funnelled into the commission. He was right.

“I try to follow the Act setting up these institutions, especially the NDDC. With the amount of money that the federal government has religiously allocated to the NDDC, we will like to see the results on the ground; those that are responsible for that have to explain certain issues. The projects said to have been done must be verifiable. You just cannot say you spent so much billions and when the place is visited, one cannot see the structures that have been done,’’ he said.

Really, the president’s decision to audit the NDDC is an intrepid quest. I doubt if any other administration took the initiative to look through the iron shield of the agency’s operations. But I am sceptical about the outcome of this adventure. My reason is simple. The current management of the NDDC overseeing the audit has been alleged to be flunkeys of Godswill Akpabio, minister of Niger Delta affairs, who himself has been accused of complicity in the contract fraud at the agency.

The allegations of Joy Nunieh, former acting managing director of the NDDC, against Akpabio are thick and cannot be discounted.  Inasmuch as I think the audit process is already tainted, I believe it should be done still.  But I strongly believe we need to reconsider the purpose of the NDDC. It has failed to achieve what it was set up to accomplish.

Do we keep feeding the beast?