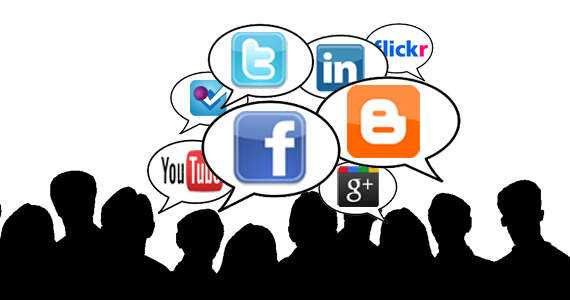 Recent survey shows a rapid increase in the number of social media users across the world. The study revealed an unimaginable paradigm shift towards social network websites. This is so because of the proliferation of mobile internet across the world and the emergence of web 2.0 which gives many people an opportunity not just to read the contents of what was formerly regarded as a static web page but to also contribute instantly on what they find interesting on the internet. The new generational media has transformed the audience from mere passive readers to a more active, effective, and interactive sphere of global community.

A report by Global Digital Statistic shows that there are about 2 billion active social network users in the world. This represents 28% of the world total population, i.e. at least, in every four, one is using the social network. The report revealed by the International Telecommunication Union (ITU) indicates that Nigeria has the largest users of the internet in Africa, with the total internet users of over 43.9 million, representing 25% of the country’s population. NCC (2013) also revealed that about 32,513, 261, representing 74% of web surfers accessing the internet via mobile devices in Nigeria. In March 2013, World Bank ranked Nigeria as the third highest users of Facebook in Africa, with total active users of 5, 534, 160 (PM News, 2013).

In 2012, Portland Communications, a Kenyan based public relation agency as well placed Nigeria as the third tweeting country in Africa (Punch Newspaper, 2012). According to Nigerian blog awards, there are about 1 million blogs own and update by Nigerians and the numbers are steadily growing in popularity.

The above figures show the rapid penetration of the new media in African continent and Nigeria particular.

No doubt that this interactive platform has given many people opportunity to express their views and contribute to any global discourse.

Social media has paved way for millions of people across the world to locate, connect, make friends, share ideas, solicit supports, and mobilize people with similar interest against unfavourable government policies, despotic and weak leaders, and injustice among others. Social media has, of course, redefined the way news is presented to the public and the way people communicate across the world.

The new media has eliminated the gatekeeping mechanism of the traditional media which was previously initiated by the government, politicians, and journalists. Social network websites such as Facebook, Twitter, YouTube, microblogging amongst others, are the popular tools in the new trend.

The popularity of the new platform is as a result of an absence of censorship and the possibility of being anonymous. Unlike the traditional media, social media allows users to express their feelings by posting whatever they like without subjecting it to review whether or not it has damaging consequences to the larger society.

As a matter of fact, social media has created a cost effective means of participatory political discourse. It gives voices to voiceless people and community. It enables members of the larger society to broadcast their feelings without necessarily seeking the services of journalists. It empowers users to get first-hand information and also allows them to contribute and rebroadcast what they read with other users.

All these dynamic functionalities have added flavour to the new media and make it more fascinating to people across the world.

Obviously, Social media is gradually pushing away the traditional media such as newspaper, television, and radio. Many people are no more interested in the mainstream media but relied essentially on social media to source for news and information around the world.

The decline in the use of traditional media has led most of the mainstream media to also integrate the platform to keep reaching out to the larger society, particularly the youth and middle age who are the main audience of the new media.

Consequently, the seeming free society created by social media is currently misused in most countries, including Nigeria, by uncultured people who turned the platform to, sometimes, a battlefield for contending groups or individuals. This dimension has no doubt, sought to serve as a major drawback for this emerging social platform.

The absolute freedom of speech initiated by the new media has, indeed, given many users opportunities to hide behind their computers and mobile phone screens to post all sorts of inflammatory words against one another.

Research shows that there is a connection between internet anonymity and internet civility. Lack of civility has, to a greater extent, influenced what users of the social network post on the internet. Many users have unwittingly posted silly comments just because they cannot be traced and made to face the consequences of their statements. Most Users of social media websites such as Facebook, Twitter, and online newspaper are found guilty of this wayward behaviour, turning what is supposed to be used for the enthronement of a healthy, friendly, and informed society to a tool of creating disaffection amongst cultural, social and religious divides.

Social media surge in Nigeria has further polarized our fragile unity and created a deep rooted hatred amongst Nigerians, which without appropriate measure, is capable of destabilizing the most populous giant of Africa in the nearest future.

The type of comments many Nigerians are posting on the internet reflect an acute decline of our national morality which is the main ingredient of a sane society.

Insulting individuals, groups or other peoples’ faith are not the best means of proffering viable solution to our multi-dimensional problems that are currently threatening our country’s unity.

Social media should be used to engage the government in good governance and or to debate on national interest in a more civilized manner.

Of course, many social media activists will see this as anti-masses or enemies of internet, but a critical analysis of the subversive impacts of social media in Nigeria will, indeed interpret the action of those countries with strict restriction of such media as appropriate measure to fight the rapid global decadence and maintaining social stability, national security, cohesion, and cultural values.

Unfortunately, some users of Facebook and Twitter are ignorant of the potential effects of this platform on individual personality. Apart from those who use fake profiles to spread lies, insult people and incite violence, others fail to realise that their profiles on social network represent their full personality. Life on social network is a replica of real life. In 2012, I made a fascinating statement that goes thus: “give me your Facebook profile then I will tell you who you are.” This statement simply means that I can analyse your calibre by exploring your social media timeline and observe your posts, comments, pictures, amongst other things to judge your personality.

As a matter of fact, the recent debate by Nigerian government on the need to regulate the use of social media would have been a right step if national interests were placed in the forefront of the debate. But from the hindsight, the debate was politically motivated aimed at clamping down the social media critics who are consistently against the corruptive nature of Nigerian government.

For the government to formulate a proper and effective policy that will guide the use of social media in the country, government itself needs to be responsive to the people.

We need a policy that will restore the rapid decline of our national morality, not policy that aims at clamping down those who engage government with constructive criticism.

There is the need for operators of online newspapers to take appropriate measures to regulate comments that are capable of disintegrating our country. Pages of online newspapers should be properly monitored so that unruly statements that are antithetical to our national security and development are filtered out to maintain their professional role of informing, educating and entertaining the public.

The Guild of Corporate Online Publishers (GOCOP) should take up the task of weeding out unprofessional hands from the system and direct all online newspapers to re-establish the gate-keeping role of the traditional media. This will to a very large extent minimize the current social media warfare among Nigerians.