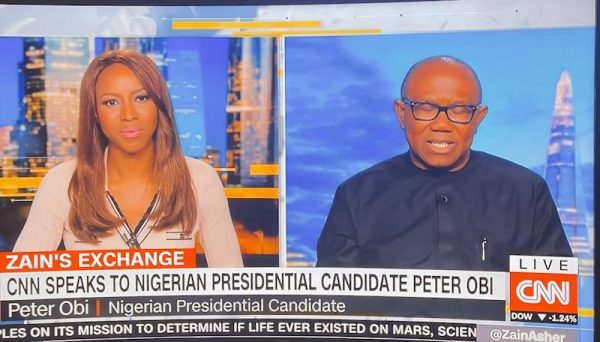 I made special effort to attentively watch the Labour Party candidate, Mr Peter Obi’s interview live on CNN to the end. I have also objectively watched the recorded video at least 4 times since last night and it has only left a bitter taste in my mouth.

First, surprisingly I am less miffed at Mr Peter Obi than I am at the anchor, Zain Asher who is; as she said Nigerian, Igbo and from the South East; even though I know she only throws in those identities whenever she thinks it serves the purpose of her career at CNN or her preferred narrative.

That interview clearly showed that Zain is not very current on issues concerning the country she calls her own. Apart from ignorantly or deliberately over exaggerating or misrepresentating the true state of things in Nigeria, she obviously knew her interviewee well and was conscious to feed him red meat to further the narrative she wanted to sell about Nigeria and he; as expected lapped it all up, mindless of the fact that it is the same country he seeks to lead.

Agreed that a politician will say anything to help his or her ambition but to essentially throw your nation under the bus on an international media; especially with lies, half truths and exaggerations is as unpatriotic as it is unintelligent.

It is okay to rail against the incumbent government, its policies and programs and then state your own policies and programs, what you would do differently and HOW; to draw a constrast. I mean that is what America politicians do; especially when speaking to an international audience.

That someone always comes across behaving like a foreigner or a non Nigerian who has not been part of whatever has been of Nigeria; good and bad; trying to present himself as the only saint and a messiah coming from outside of Nigeria and the Nigerian system to salvage Nigeria is as laughable and insulting as it should be a cause for concern to all patriotic and well meaning Nigerians.

Even as I lowered the bar on my expectations from the interviewee; having listened to him on sundry issues; including on climate change, ASUU strike, insecurity, infrastructure, power, economy etc, I must confess that he managed to take ‘no-show’ a notch higher in that interview.

First, his penchant for taking the ‘third person’ approach to questions. For a direct question of ‘what would you do’?, he would answer “You do …”, when it should be ‘I will do …’. Then he does not say what he would do and how. Fortunately or deliberately, he has been picking interviewers who deliberately won’t or can’t take him to task. So he gets away with that.

Then, listen to his submissions or responses on some of the specific issues that arose in that CNN interview.

“You have to deal decisively with the issue of security …”. HOW?

“You have to start pulling people out of poverty as quickly as possible …”. HOW?

“You have to reduce aggressively cost of governance and then deal with the issue of corruption …”. HOW?

“What is your plan to transform Nigeria from a consumption economy to a production economy”? In view of the fact that Nigeria has being a net importer of petroleum products inspite of being Africa’s largest producer of crude oil.

He answers: “.. there’s no reason why our refineries cannot work .., … there’s no reason why we should not encourage private sector to build refineries and operate them and they are not rocket science. It can be done as quickly as possible. You can use today to decide to remove the fuel subsidy, use the resources to support critical areas of production, from critical infrastructure, to education, supporting investments in refinery which will be like I said done within a shortest possible time”. Tell me something I don’t know please.

What Exactly Have We Been Doing In The Last 7 years?

The Dangote Refinery is a private refinery being built in Nigeria right before our eyes and we know how it has progressed and the speed; even with maximum commitment and concerted attention being given to it by Alhaji Aliko Dangote, the Dangote Group and the Nigerian government. That is actually the “shortest possible time”; if you are not living in a make believe world like Mr Peter, that is.

Mr Peter Obi has access to Aliko Dangote as a fellow millionaire and Nigeria elite (never mind the pretence) that most of us do not have. How difficult is it for him to approach Dangote for a free lecture?

Furthermore, in the last seven and half years, Nigeria has more private Modular Refineries in building than at any other time in Nigeria’s history; all with the Buhari government’s full support. The licenses for most of those refineries were issued and the fees collected by past administrations but none was built. Indeed the 10,000bpd Duport Modular Refinery in Edo state is being facilitated by the Nigerian Content Development and Monitoring Board (NCDMB), a Federal Government Agency.

Then ‘”you can decide today to remove fuel subsidy ..”. Like seriously? How? Without the appropriate measures in place like completing the ongoing holistic repair of our state owned refineries and the Dangote Refinery as well as the Modular Refineries being built? Not to mention the Petroleum Industry Act which has been signed into law by President Muhammadu Buhari to give legal, structural and administrative framework and teeth to all that needs to be in place before sustainably and realistically removing fuel subsidy; bearing the average Nigerian in mind.

If serious governance and re-building Nigeria out of the rot it has being in for decades were are as simplistic and kindergarten as Mr Obi keeps presenting, then why do we need a messiah? Anyone would have done it.

Mr Peter Obi said, past Nigerian leaders have always been elected “based on ethnicity, religion, my turn, connection or one form of bias or the other, … or structure which always says structure of criminality …”. Interesting. It is left for objective Nigerians to say which of these that he mentioned that he has not exploited as a Governor and in his current quest to become President of Nigeria.

He further says; in his usual apocalyptic and messianic manner that Nigeria is next to “collapse” and postures himself as the only messiah without who Nigeria will be buried. He then dwells on insecurity in and the plight of the North while conveniently forgetting that his South East; including his home state Anambra is even more unsafe and under developed today than many places in the North.

Sincerely, all these would have been fantastic if we were looking for a philosopher, an impressionist or a chronicler-in-chief of our woes and not a President and Commander-in-Chief.

These are some of the reasons that I remain convinced; even after this un-disappointing CNN outing that the combination of Bola Tinubu and Kashim Shettima; without any primordial sentiments are better for Nigeria going forward.

The more I objectively listen to Mr Peter Obi and look at my check list, the more I realise that most of the things he merely talks about without any how-to-dos; security, production, economy, agriculture, power, re-equipping the security agencies, security architecture, education, health, infrastructure, oil and gas etc are already being tackled verifiably by the Buhari administration.

So no better persons out of what we have on offer to take those forward than two people who not only know and acknowledge those realities and verified efforts but who equally have the “commitment, integrity, competence, commitment and track record” and I dare add patriotism and belief in Nigeria to build on them going by “what they have done in the past” viz Bola Ahmed Tinubu and Kashim Shettima Mustapha.

In all, I am glad that the Labour Party candidate pointed out that Nigeria needs a leader that you can “… look at what he has done in the past …”, with “character, competence, capacity and commitment to do the right thing …”.

These indeed are the crux of the matter and I urge Nigerians to listen to him and do the needful; devoid of primordial sentiments and emotions. In the end; beyond the semantics and noise, it is our collective lives and future that are at stake in next year’s election.

Finally, back to our sister Zain Asher, I will not blame her or CNN too much for not knowing the exact situation of things with Nigeria today beyond what they see on social media and from fifth columnists. What has the Nigerian government done in recent times to tell our real story and trajectory to the world? How many features have we had on CNN in the last 7 years?

Will we send someone like Ajuri Ngelale or Festus Keyamo SAN (forget people like me) to go on CNN and factually counter the many lies, half truths and mischaracterisation of Nigeria bandied in that interview? Even if we have to pay for it? It is a matter of national truth, pride and honor; beyond partisan politics and election.

Patriotic Nigerians, the ball remains in our court. We have been served.