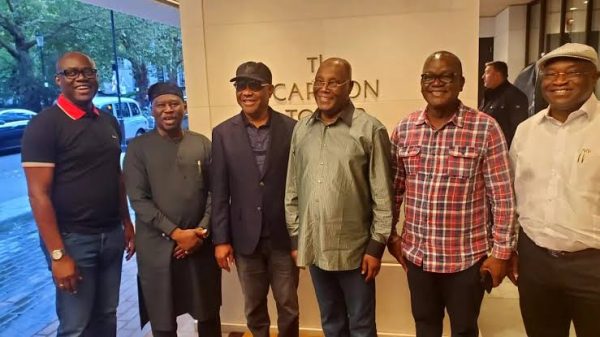 Deans of the diplomatic corps spoke the minds of millions of compatriots when they rose in unison to condemn the political peregrinations and perambulations of our political class who have turned London into a Mecca of sorts for their political jamborees. Not only does the political class jet out to London and other exotic capitals of the world at the slightest hint of headache or toothache, but now they have made the former colonial metropole the avenue for their political junketing. For many Nigerians, the action of this set of politicians is not only vexatious, gauche, and ill-timed but unpatriotic to say the least. Having failed to create a conducive atmosphere for growth, peace, and economic development at home they are busy chasing the will-o’-the-wisp in the colonial metropole.

The ex-diplomats had argued that it was not only shameful but demeaning for the political class to travel to London to sort out their political differences, which has nothing to do with the existential crises and challenges facing Nigerians in both economic and security terms. The diplomats described the action of the politicians as unpatriotic and smack of colonial mentality, whereby members of the colonized state cannot wean themselves from the feeding bottle of the metropolitan state. This action and behaviour suggest a deep-seated inferiority complex and symbol of colonial hangover.

The Nigerian Academy of International Affairs (NAIA), a body of eminent and retired professionals and scholars in diplomacy and international affairs, had frowned on what it described as the London show of shame the series of meetings politicians held last week in the United Kingdom.

It would be recalled that the three leading presidential candidates – All Progressives Congress’s Asiwaju Bola Tinubu, Peoples Democratic Party’s Atiku Abubakar, and Labour Party’s Peter Obi separately met with Governor Nyesom Wike of Rivers State and other opposition governors in London on matters of mutual interest over the 2023 general elections. Nyesom Wike has become a political gadfly being courted by both the ruling party and the opposition to which he belongs.

President of NAIA and ex-Foreign Minister, Prof. Bolaji Akinyemi, in a statement on behalf of the Academy’s Fellows, said they were “scandalised by the clownish gathering of some members of our political elite in London recently following similar meetings in Paris and Dubai.”

The Academy noted: “The ill-advised and unwitting jamboree of shame displayed by these leading Nigerian politicians in London/Paris has demonstrated that the Nigerian environment created and polluted by them is not conducive to their vainglorious self-importance and unearned esteem.

“Consequently, and because of their neo-colonial mentality, which blinded them from seeing and appreciating the goodwill and resilience of Nigerians, they preferred savoury Western atmosphere. The implication of which is the exposure of Nigeria directly or indirectly to unwarranted Western influence, particularly as they were perceived to be washing our dirty linens in the full glare of the world.”

Much as we can excuse the action of those who don’t hold political offices since we assume their trips would be funded from their private pockets the same thing cannot be said about current governors who were in London for the jamboree. The question to ask is whether the jamboree was a private meeting borne by the participants or state sponsored trips? As most often happen both the governor’s official and private trips would be funded by the state. Yet, in some of these states workers are being owed salaries arrears running into several months and at the same time some governors have not been able to implement the N18,000.00 minimum wage. Most often, in this clime, there’s a thin line between the official activities of the governors and their private engagements. In short, their private and public engagements are blurred, hence the state may pick up the tabs for their walkabouts, even if it has nothing to do with the advancement of their state’s interests in all of these.

This same set of political actors had recommended to the president that the civil service should be downsized and offer federal civil servants above 50 years one-off retirement package to exit the service, and employ lower-cost, more ICT-compliant youths and women graduates. Part of their recommendations includes the implementation of the updated Stephen Oronsaye Report as well as expediting the privatization of non-performing assets. Also, to reduce fiscal deficit to no more than 2 percent of GDP in 2023 – 2025.

However, nothing could be more self-serving than the suggestions made by the Governor’s Forum on the retirement of those who have attained 50 years in service. Of course, the Nigeria Labour Congress has condemned the governors for making such an impolitic suggestion and instead advised the governors to cut down on waste and the various perks of office that they enjoy.

Still, the political class by their acts of omission and commission has reduced the nation to its knees with the economy comatose and virtually on life support, with the attendant inflation that has hit 19.4 percent driving the cost of essential items and foodstuffs to the roof. The astronomical cost of living has further impoverished Nigerians. Add to this the worsening security situation as well as the crisis in both the health and education sectors. Also, the mainstay of the economy, which is the oil sector is haemorrhaging with crude oil thefts on the increase and with an estimated sum of $1 billion lost to crude oil thefts in the first and second quarters of 2022. As it is, the ruling All Progressives Congress (APC) has over-borrowed so much that debt servicing now outstrips revenue generation. Moreover, to fund the 2023 budget, the federal government plans to borrow over N11 trillion to finance the proposed 2023 budget deficit, a development far above the stipulated threshold in the Fiscal Responsibility Act. In addition, Nigeria’s debt stock stood at $100billion as of March 2022.

With all these challenges staring Nigerians in the face, it is most odious and disheartening that the political class will choose such an inauspicious moment to embark on barren and empty jamborees meant to massage their egos and satisfy their false sense of self-importance, delusions of grandeur, overweening pride and a feeling of entitlement. They have gone to London not to attract investments and business but to banter and trade away the future of Nigerians, especially the youths who are emasculated and deprived, left with no hope of a redeeming future. Mostly their parley has been on sharing offices and allocating perks of office to themselves. As the diplomats noted, this cast of political actors is counting their chickens before they hatch. They are putting the cart before the horse, for it is quite possible that their permutations may fall flat on their faces come 2023.

To be sure, the Nigerian political class needs to take a cue from the Asian Tigers who were in the same league with us back in the 60s and had also been victims of colonialism. Because of the right mix of leadership, discipline, and vision, these Asian Tigers have turned the corner and made a great leap forward in terms of development, industrialization, and a general index of human development. They have collectively put on their thinking caps and found homegrown solutions to the myriads of problems that challenge their societies. They did not achieve this by moonlighting and engaging in frivolous trips to the colonial metropolis to find solutions to their problems. The success stories of those societies we envy and troop to in search of a sanctuary are hinged on the hard work, vision, and discipline on the part of their political leaders. They did not achieve all this by frivolity, flights of fancy, cavorting and carousing. There’s a deep and engaging lesson for our political class on that.

Basically, the action of this set of politicians simply demonstrates to the whole world that we are a bunch of unserious people who cannot proffer solutions to their problems but would rather junket abroad in search of frivolities and make jejune excuses as we pretend to put our house in order. At the heart of our problem, is a collective lack of rigour and discipline to build and develop our economy and find an enduring solution to our myriad of problems. The joke out there will be on us, described as the giant of Africa. With this cast of political figures, we are more or less a clay-footed giant. Little wonder, we have become the butt of jokes in many world capitals, a reflection of the depth of the abyss into which we have sunk due to the antics of our short-sighted politicians. Clearly, the essential banality of our politicians rankles.

Having said that, it is most distressing that our political class fiddles while the nation is in the throes of grave economic and security challenge. Junketing to London to see the Queen, as it were, is not the solution to our problem. As the diplomats rightly noted, Nigerians are diminished by the antics of this cast of politicians. Indeed the Beautiful Ones are not yet born.