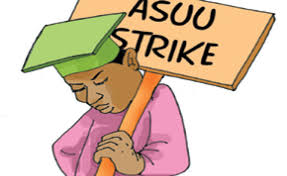 From the hindsight, there doesn’t seem to be any other nation, not even the so-called backward one, where higher education, in particular, has been toyed with and bastardized than the case of Nigeria, thanks to incessant industrial actions by the university lecturers, under the canopy of Academic Staff Union of Universities (ASUU).
Either by design or by accident, ASUU had worn a toga of war or strike action right from its conception in 1978 with succeeding government knowingly or inadvertently creating a fertile ground for such macabre-dance of ASUU, the strike specialist.
Indeed, over the years, ASUU has consistently resorted to strike action as the only alternative means of pressing for their demand.
ASUU, it would be recalled, succeeded Association of Nigerian University Teachers which was, itself, formed in 1965. ASUU has since then, undergone series of undesirable strike actions with devastating consequences, of stunting the qualitative growth of education.
Going down the memory lane, ASUU has been characterized with rifts, strike actions and demands that have never been met by the federal government.
It is important to understand some protracted strikes which have contributed to rapid decline of quality of our graduates from the Nigerian universities.
For example, in 1988 the union organized a Nation Strike to obtain fair wages and university autonomy. As a result, the military government proscribed the union on August 7, 1988 and seized all its property. The Union was allowed to resume in 1990.
In 1991, the Union declared another strike but was again banned on 23 August 1992. However, an agreement was fairly reached on September 3, 1992 that somewhat met several demands of the Union, including the right of workers to collective bargaining.
In 1994 and 1996, the union organized another strike, protesting against the dismissal of staff by the Sanni Abacha military regime. As a matter of fact, during the military regime, the universities’ academic calendar were greatly disrupted.
In 1999 when the country returned to civilian rule, many students, including the lecturers heaved a sigh of relief, thinking the civilian rule would be better than its military counterpart. Unfortunately, the situation continues in worse form.
The civilian regime too learnt fast the art of refusing to reach consensus with ASUU by permanently resolving the incessant strikes in Nigerian universities.
From 1999 to date, strike actions, of various type and degree of duration have become part and parcel of the academic calendar in the Nigerian universities.
In 2007, the union went on three-month strike and in May 2008, it held two one-week ‘warning strikes’ to press for their demands, including an improved salary scheme and reinstatement of 49 lecturers who were dismissed many years back.
In June 2009, the ASUU again directed its members in federal and state university nationwide to proceed on an indefinite strike over non-implementation of the agreement it earlier reached with the federal government. After three months of strikes, in October 2009, the ASUU and other staff unions signed a memorandum of understanding with the government and called off the industrial action.
As the federal government delayed the implementation of the agreement, ASUU, on September 23, 2011 issued a one week warning strike, and yet the government remained adamant on the agreement which consequently resulted to another declaration of a total, indefinite and comprehensive strike by the Union. The strike lasted for about two months. The strike was aimed at compelling the government to sincerely implement the 2009 Agreement which it freely entered into with it. The strike was however, suspended on 2nd February 2012.
It is so unfortunate that, less than two years after the Union resumed from one of the protracted strike, it called for another indefinite, total and comprehensive strike. What a shame for the Unions and the Nigerian government, and a disgrace for Nigerian educational system!
As the rift between ASUU and federal government remains intractable, there is much need for universities and other academic Unions to find another alternative means of pressing home their demands, so to avoid the devastating consequences of incessant strikes in Nigeria universities.
Such alternative should take cognizance of the quality of education for all Nigerians. Strike actions should not be turned into a deep-rooted endemic culture in our educational system.
As Professor Biko Agozi rightly said in one of his publications:
”The time has come for us to review the permanent revolution strategy of ASUU and see if the mode of protest has outstripped the means of protest and what needs to be done. The preferred means of protest by ASUU is the declaration of indefinite strikes. If we look around the world, it is clear that this means of protest is no longer as popular as it once seemed in the 20th Century.
“Indefinite strikes by university teachers are almost unheard of  in a modern university where the mode of struggle is predominantly intellectual and moral for obvious reasons.
If the universities in Nigeria are nowhere in the ranking of the top 1,000 universities in the world, it may not be simply because of inadequate funding but also because for large chunks of the academic year that university academic staff are on strike for legitimate reasons when they could be contributing scholarly growth that would propel our institutions into the list of some of the best in the world.” [myad]