Home OPINION EDITORIAL Allah Does Not Himself Accept Forced Conversions 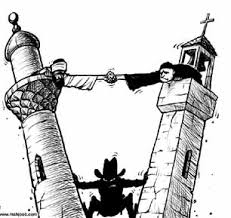 The French Philosopher, Voltaire made the distinction between wisdom and knowledge from a personal experience he had. As a thinker and a critic, he was forced to flee his native country, France for England.

In the course of his stay, there occurred one of the regular storms in relations between England and France. He had the misfortune of running into an English mob, which turned against him shouting “Kill the Frenchman, kill the Frenchman!” Voltaire answered the crowd by appealing to their pride. “Men of England!” he shouted, “Have I not been punished enough for not being an Englishman?”
From death chants, the mob sang his praises, themselves feeling good in self-pride.
Those 167 girls, of the 200+ stolen who spoke against the background of forced conversions to Islam showed wisdom. They need first of all to be alive. But the comfort they should have is that Allah does not Himself accept forced conversions.
As the curtains appear destined to come down on the long drawn abduction saga, Nigerians who have had their attention deflected from other issues happening around the globe would realize by the time this is all over, that they definitely have a lot of catching up to do.
For a good reason, our news media have been overly busy reporting mostly news related to Boko Haram and the theft of those girls. Nobody can fault this, especially in view of the successful campaign on social networks to keep this issue on the front burner. This country suffers from chronic amnesia.

We forget big issues easily and just move on mechanistically. Not this one, however, where you have leading statesmen, including Pope Francis, Prime Minister Cameron, President and Mrs. Obama, the Mayor of New York and here at home, Atiku Abubakar and Asiwaju Bola Tinubu holding placards with the inscribed hashtag “BringBackOurGirls” trending all over the world.
There will be a lot of “noise” when you have civil rights groups supporting angry mothers protesting in every city in the country and the world’s major capitals asking for action on the recovery at the girls, vis-à-vis the manifestation of lethargy, incompetence and denial on the part of rulers who are unable to secure the safety of their own citizens.
An astute politician would have thought every word he/she is about to utter before millions of television audiences but when you hear this country’s leaders asking questions if any girls had gone missing at all, it makes you wonder where such men/women were born and bred. Thankfully, in yet another tragicomedy, the leader of the sect that stole the girls, Abubakar Shekau put the 167 of them in a video, all of them wearing the Islamic regalia, Hijab, signifying their conversion to Islam.

While this heart-wrenching picture had the effect of reassuring anxious parents their girls were still alive, it was at the same time an irrefutable evidence that indeed, there were girls that had gone missing.
Four weeks of denial have also left a government in a denial exhausted not only in body but in rhetoric, forcing it to make the final admission that foreign assistance was needed. Twenty countries – and still counting – have jumped in with the United States of America, France, United Kingdom, China and Israel promising to throw in just anything to help secure the girls and free this country of the intractable insurgency.
For this and other reasons, if you meet anybody within or outside Nigeria, the discussion on the lips of everyone is Boko Haram and the missing girls. If there are a few exceptions, it must be out of concern for the world’s largest democracy, India, which just finished voting in an election that may install a government sworn to the disintegration of law and order.

What the imminent victory of BJP, Narendra Modi’s extremist, Hindu nationalist party means is that India will have a government that takes minorities, notably Christians and Muslims head on in a straight fight. If elected into office, Mr. Modi has promised a unified civil code that will force Hindu practices with regard matters such as marriages and inheritance on minorities such as the Muslims and the Christians who had before now, maintained their distinct practices. He has pledged to outlaw the slaughter of cows and has said he would consider the building of a Hindu temple on a controversial site, Ayodha, revered by Muslims. Modi also plans to strip the Muslim-majority State of Kashmir of its semi-autonomous status. The man is barely able to conceal his wish to decimate the fabric of that country’s diversity. On account of this, the Economist, an internationally respected publication came out very hard on him, saying that it cannot bring itself to back Mr. Modi for India’s prime ministership. It said he is too divisive a personality for a pluralistic society like India.
The Guardian of London called him a fascist. In addition, the paper published a letter by leading international citizens, including Salman Rushdie saying that if he is elected, it will not bode well for India’s future.
Another leading U.K. newspaper, The Independent says that the thought of Mr. Modi becoming India’s next Prime Minister is enough to make one “shiver”.
If Modi’s BJP clinches victory in the results expected to be announced on Friday and forms the government of India in line with widespread expectation, this would not be first time that democracy as a system of electing governments throws up the wrong type of outcomes. The government in the semi-independent territory, Gaza under the control of Israel, which has been dubbed “terrorist” by much of the world itself came into office through an election. The Nigerian President, Dr. Jonathan Goodluck who has shown a lack of interest in being President for all Nigerians as illustrated in the laizes-fair handling of the insurgency and the girls’ kidnap equally came to office through an election. What is terrifying is that India’s Supreme-leader-to-be is a man who will find comfort in a club, which membership includes the leaders of Al-Qaeda in the Middle-East, Asia and Africa.