Home OPINION EDITORIAL Buhari To Niger Delta Militants: Be Patient, I Will Rebuild The Region 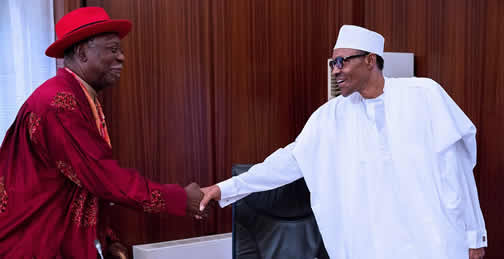 President Muhammadu Buhari has called on traditional and opinion leaders in the troubled Niger Delta area to appeal to the people of the region to be patient with his administration, promising that he is on the right path to rebuilding the region.

In a statement by President’s Special Adviser on Media and Publicity, Femi Adesina, the President, who  spoke when he recieved a delegation of the Niger Delta Dialogue and Contact Group led by the Amanyanabo of Twon Brass, Bayelsa State, King Alfred Diette-Spiff, at the Presidential Villa, Abuja, promised that under his watch, Nigeria would witness judicious utilization of resources.

“We intend to rebuild this country so that our children and grand-children will have a good place they can call their own. A lot of damage has been done, so I want you to tell the people to be patient.

“When you get together with other leaders, please pacify the people. We will utilise the resources of Nigeria with integrity and rebuild the country.”

Buhari said that the gazette on the Niger Delta amnesty programme by the Umaru Yar’Adua administration is being studied with a view to determining what had been fulfilled, promising that whatever is left would also be addressed.

“I want to get as much intelligence as possible on the situation in the Niger Delta. I have encouraged law enforcement agencies to contact leaders like you in order to have enough information to deal with the issues once and for all.”

He sympathized with investors who borrowed money to invest in the Niger Delta and have not recouped their investments due to insecurity even as he reiterated his appeal to those who perpetrate violence to embrace peace and give government a chance.

Diette-Spiff said the group was made of peace builders, dedicated to peace and stability in the region.

Also, President Buhari and Vice-President Yemi Osinbajo on Thursday had a closed-door meeting with the nation’s security chiefs.

It was gathered that the aim of the meeting was to address the military operations in the volatile Niger Delta region and the ongoing anti-terrorism war in the North East.

The meeting was also attended by the Minister of Defence, Brig-Gen. Mansur Dan Ali (retd.); National Security Adviser, Maj.-Gen. Babagana Munguno (retd.); Secretary to the Government of the Federation, Mr. Babachir Lawal; and the Chief of Staff to the President, Mr. Abba Kyari.

They did not speak to journalists at the end of the meeting, which lasted over three hours. [myad]