Home OPINION EDITORIAL Editorial: Doctors, Where Is Thy Conscience? 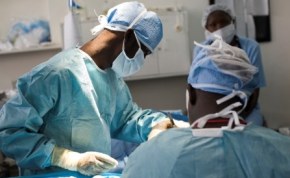 For about two months now, resident doctors have stayed out of government hospitals, protesting the alleged nonchalant attitude of the government to their demands.
The doctors, trained primarily to save life, have decided to continue with their strike action even when a deadly case such as Ebola, which by all intent and purposes, is an emergency case came calling.
It is instructive to know that even in the civil service rule, which all medical officers, including the doctors signed, they pledge to take the protection of peopl’s lives as the first in the priorities over and above their personal interests. To the extent that it is mandatory for doctors to save the lives of even their known enemies: including a person who is confirmed to have killed their wives or mothers.
No one would deny the fact that doctors have genuine reasons to go on strike by avoinding hospitals, but it beats one imagination what each of them is thinking during this time when Ebola disease is making headlines all over the world and their counterparts elsewhere are running around to find ways of controlling its spread.
The saddest part of it is that, as minister of Health, Professor Onyebuchi Chukwu said on Wednesday, while they have not been in their duty posts to attend to poor and innocent Nigerians, most of who are dying unnaturally, they are still collecting their monthly salaries. And most of them have fully take solace in their private hospital or clinic where they charge cut-throat medical bills for the same poor innocent Nigerians, away from the humanitarian services they are supposed to be rendering in the government hospitals and medical centres.
We in Greenbarge Reporters find it hard to believe that any doctor, much more, 16,500 of them in Nigeria, would throw the tenet of the profession into the dustbin in glorification of worldly thing. It beats our imagination how they would, simply as a result of their grudge against the government, allow Nigerians, from whose sweat revenue is generated to pay their salaries, to suffer all forms of diseases, known and unknown with nowhere to turn to for succour except their private, forbidden private hospitals and clinics.
Our heart is gladdened this morning to know that, amidst the madness which the resident doctors have enmeshed themselves in, ‪Nigeria’s premier university, the University of Ibadan (UI) is planning to develop a vaccine for the Ebola Vírus Disease (EVD).
This cheering news was broken yesterday by UI Vice Chancellor, Professor Isaac Adewole, while speaking at a Town Hall Discourse on Ebola at the Trenchard Hall of the institution.
We are appealing to the striking doctors and their conscience to jettison the present blind pursuit of selves by returning to work and joining the University of Ibadan, the government, kindhearted philanthropists, other institutions and individual to arrest the spread of the disease. They should help, like their counterparts around the world, in finding urgent and collective solution towards controlling Ebola that is threatening all of us.
That would be one of the best ways of gaining the sympathy of humanity and God’s pleasure, besides fulfilling professional calling. Anything short of this, to, us, is selfish, unGodly and a reflection of the antics of devil incarnate. [myad]