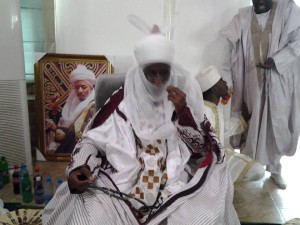 What happened in Kano around the emirate circle on Sunday, June 8 reminded us of a wise African proverb which says that you cannot beat a child and drive him away from your house, but still pursue him to his father’s house with continuous beating.As a matter of fact, the mud of politics thrown carelessly into the selection of a new Emir for Kano after the demise, on Friday, of Alhaji Dr. Ado Bayero, was so glaring that no sensible person could miss its import. It was so cleverly done that even those of us in the business of online publishing system fell flat for it.It was like the powers that be, which had earlier beaten Mallam Sanusi Lamido Sanusi and drove him out of the system was too busy with just anything to prevent him from getting the opportunity of being consdered as the new Emir: a case of suspending him as Governor of the Central Bank of Nigeria (CBN)and asking him to go away from the federal service and still following him to his traditional enclave; his father’s house in Kano, with the purpose of denying him the opportunity of getting what rightly belonged to him.But Kano people knew better or did they?The circumstances surrounding the first announcement of the name of Alhaji Sanusi Ado Bayero as the new Emir showed clearly some machievellian moves by those who wanted to stand between Sanusi Lamido and the Emirship to do so conveniently.It beat one’s imagination how the news was floated and made real that the first announcement of the appointment of Alhaji Sanusi Ado Bayero was made by Sanusi Lamido via his twitta. As a matter of fact, most of the online media, including Greenbarge Reporters, in haste not to be beaten to it, quoted the purpoted message of Sanusi Lamido’s twitta. Even most of the conventional news media went to town with the wrong news, some of them had started analysing the history of the Sanusi Ado Bayero.Of course, shortly after publishing the first false version of the controversial appointment, it dawned on the editors of Greenbarge Reporters, even before the announcement of the name of Sanusi Lamido, that some funny elements were playing smart politics with this matter.Number one: Sanusi Lamido, as one of the contenders to the throne couldn’t have gone public to be the first to announce the name of the opponent of Sanusi Ado Bayero.Number two: the tradition is clear that it is only the governor of the state or his representative that had the authority and privilege to make such a sensitive announcement.Number three: there was no way Sanusi Lamido would have trivialized such matter by resorting to social media for the announcement of a new Emir.Having considered these facts, Editors of the Greenbarge Reporters ordered for quick delete of the news item from the site.A few hours later, the fear the Editor nursed came to pass when governor Rabiu Musa Kwankwaso, through the Secretary to the State Government (SSG), announced the name of Sanusi Lamido Sanusi as the new Emir.The first question that came to mind was: why would politicians infiltrate into this revered stool simply to score a point or hit back at the face they don’t like?Another quick question was: why would some Kano youths take to the streets, protesting whoever become Emir when they know that all the contestants are brothers?The only thing that would eventually shame the promoters of this senselessness over an issue that has long been settled would be that the Emirship of Kano and the contest for it is not the same as political position where the looser would be rigged into office, with such looser daring the real winner to go to court even when it is clear that the court issue is a formality to affirm the looser’s “victory.”