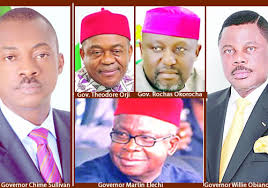 A bitter seed is presently being sown in the South East, inhabited by Igbo/Christians, against the people from the Northern part of the country, inhabited mainly by Hausa/Fulani/Muslims.
The seed is coming in the form of alleged plan by leaders in the South East to issue Identity Cards (ID) to Northerners/Muslims doing businesses for survival on their land. The idea of ID cards for the Hausa/Muslims stem from flat conclusion, by the South East authorities, that every Hausa/Muslim is a member of Boko Haram.
As a matter of fact, even Igbo people in other parts of the country in particular and most Christians around the country in general, hold this dangerous notion that, and indeed, regard every Muslim as Boko Haram.
When it first started, many Muslims regarded such ‘description’ by the Christians as a mere joke, but it appears to have now been elevated to a personality of its own.
So much it is that the Christian dominated parts of the country have now stepped up measures, one of which is ID cards, to give the obviously wrong and wicked notion a stamp of reality.
It is on record that the Nigerian leadership, on top of which is President Goodluck Jonathan, has publicly acknowledged the fact that Boko Haram has nothing to do with Islam. Even the teenage Pakistani activist, Ms. Malala also added her voice to the fact that members of Boko Haram couldn’t be fighting for, and on behalf of Islam and Muslims.
The Sultan of Sokoto, Alhaji Muhammed Sa’ad Abubakar III had recently said, with a lot of bravery, that Boko Haram was the creation of politicians, ahead of 2015 general elections. That is irrespective of religion. Even the Nigerian noble laureate, Professor Wole Soyinka made similar observation; that Boko Haram is more political than religion.
But despite all such acknowledgments as well as empirical evidences and practices of members of the sect, those who are already fixated continue to remain unconvincing.
There is, indeed, nothing more naïve than for some dogmatic religious haters to continue to cling to an idea, even when the realities show that such idea is phoney.
One of the realities which such dogmatic religious zealots have not adverted their minds to, or are so fixated on is the fact that whenever Boko Haram strikes and wherever, they would not ask Muslims around the scene to vacate before they blast the bomb.
It is clearly on record that members of Boko Haram have been attacking Churches across the North East the same way they have been attacking Mosques.
Similarly, they have maimed and killed Church leaders, including Pastors the same way they have maimed and killed Islamic religious leaders, including two Sheikhs one in Kano and the other in Zaria. This is in addtion to the murder of a first-class Muslim traditional ruler in Borno state recently.
It is therefore more like a double trouble for an average Muslim, who is as, if not more peaceful than a person in any other religion, to be facing aspersion cast on him by Christians while also facing the same fate of possible elimination by Boko Haram as they, the Christians.
Besides, there have been two or more cases of even Christians being caught red-handed trying to detonate bomb, or carrying out activities that are not different from that of Boko Haram in the recent past. In other words, some Christians have been caught in the Boko Haram garb and style, which point to the fact that anybody can be termed Boko Haram.
It is therefore, within this context, that we in Greenbarge Reporters see it as a sign of spiritual and moral wickedness to group ALL Muslims in the country and make them ‘suspected Boko Haram’ and much more, subjecting them to identification formalities anywhere outside the supposed Islamic region.
The Northern social organization, Arewa Consultative Forum (ACF) has recently called the authorities in the South East and indeed, Christians, to order over the reported registration of Hausa/Muslims doing businesses in the region for the purpose of issuing them ID cards, against the backdrop of their being termed Boko Haram suspects.
ACF expressed the fear that if the leaders in the North should embark on a similar action by identifying the Igbos in the northern region, may be as Kidnappers, Armed robbers, it could cause crisis that may lead to undeserved division of Nigerians on ethnic or religious consideration.
The Northern umbrella body quoted statistics which indicated that Igbo investments in Kaduna, Kano, and Jos alone amounted to N45 trillion. It said that with such huge investments in just three States of the North, the Easterners have no reason to maltreat Northerners doing businesses in the East.
“If the table turns round, it could be disastrous as these investments may suffer. But we are praying for understanding among the entire Nigerians to accept themselves wherever they live to earn legitimate means of livelihood.”
This is saying in effect that he who lives in glass house should not begin to throw stones. After all, Nigerians, as they are now, are so interwoven that touching one in one part of the country would create a boomerang effect on another in other part of the country. Or is it reprisal?
Therefore, sowing this bitter seed may spread across the country like the seed of melon.
In the end, no one will truly be a victor. [myad]