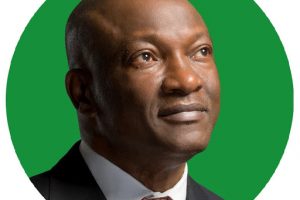 For the All Progressives Congress, (APC), the July 14 gubernatorial election in Ekiti is like the epic battle of two bitter, ancient football rivals. In the first finals, the prejudiced referee acted like a striker, midfielder and linesman for one side.  In this new battle, the once defeated side now has another chance for a rematch without the hindrance of a partisan referee. This time around, the incumbent, Mr AyodeleFayose and his crony, Mr OlusolaElenka will no longer have free kick of the ball. The Federal might, which has always been Fayose’s spring, now hosts his imminent pitfall. But one big mistake is for the once defeated side to field the same team, use the same strategy without tactical alteration. Figuratively, the defeated team is currently choosing its line-up.  On May 5, its captain will be picked.

Four years after the defeat of the All Progressives Congress, (APC), the party is desperate to reclaim a battered image. However, even with the assumed backing of the Federal authorities, the defeat of Mr Fayose and his crony is not given. The possibility of APC dodging another devastating downfall depends on who wins the primary election slated for this Saturday. While Fayose has given a clear direction on his path, the APC is enmeshed on a riotous, trampling race that may produce a candidate who may be another Fayose’s piecemeal. This is the grave error that APC leadership might commit. This is the dangerous path they might take to the party’s peril. To win the election, the APC has the historic responsibility to organize a primary that is not driven by cash nor motivated by the short-sightedness of a few cabal in the core-North who has been rumoured to be hell-bent on influencing the primary with enormous resources to the detriment of long term stability and prosperity of the commonwealth.

To win the main election, APC needs a sharp break from the past. The party needs a bold, decisive, courageous and iron-cast figure whose sneeze will send Fayose scampering. The party also needs a candidate that will not betray the party. In the context of the realignment on-going in the country, there is the fact that an APC candidate without long standing ideology may be swayed to lead an onslaught against the same APC in the coming years. There are indeed real dangers that Fayose actually has a mole or moles among the aspirants. This is the reason why flirtatious politicians-and some of them are contestants in the APC primary-with a rich history of promiscuity and ambivalence, must be avoided like a plague. It is better to hack them now, despite their pretences, than to have to live with the atrocities they will hatch.

Apart from these considerations, the APC leadership must be awake to the political realities in Eikiti State without which the party will commit dreadful errors that will make her flounder and be washed away like feeble grains. In the first place, the APC needs to pick the candidate with the highest propensity to win the governorship race. A key consideration is to understand the balance of political forces, voter’s strength, where it is most potent and the history of voting patterns in the state.

Already, Fayose has scored a key political point by picking his candidate from Ikere, a key city in Ekiti. How does the APC counter this move? There are 2, 195 polling units in Ekiti State. Out of this, Ikere has 86 polling units. The number of registered voters in Ikere is 65,000. The possibility of Ekiti APC producing an Ikere candidate in the next primary has been hampered by the fact that five APC candidates have emerged from this historic town. Though Dr WoleOluyede was unanimously agreed by a powerful section in the city, the other four have spat defiantly in the sky and captured the sputum, in anger, with a splash on their faces.  The four are going ahead with equal momentum.

Ikere also has to contend with cultural divisions occasioned by the gulf along her polarized traditional institutions. Ekiti South has the highest aspirants of 11;  Oye council is the next with the highest number of 5; Ekiti central 7; North 7; Gbonyin 3; Ekiti East 2; IseOrun 2; IrepodunIfelodun 2; Ijero 2; IdoOsi; Ekiti East 2;  Emure 2. In all, there are 33 aspirants out of which 27 have been cleared by the screening committee. Considering the balance of forces, all the 27 aspirants will have to scramble for delegates in 15 LGs, except Ado which has only one aspirant, Senator BabafemiOjudu. Ikere for instance will split between 5 candidates. Ido-Osi will be a battle ground between two aspirants. Oye where Dr KayodeFayemi, Senator Ayo Arise, Bimbo Daramola and others come from will be fiercely contested by 5 aspirants.

The only LG that stands out is Ado, with 182 delegates, by far the highest in the entire state and the most cohesive.  Ikere has about 56 delegates. Ado Ekiti, where Senator BabafemiOjudu comes from will be going as one team.  From the prism of logic and common sense,   all what Ado needs is to win pockets of support from other LGs to clinch the trophy.  There is no doubt that a candidate from Ado will strengthen the potential of APC winning the July 14 poll.

Traditionally, Ado has always been the most remarkable electoral determinant of Ekiti voting outlook.

At the advent of electoral politics in Ekiti history, it took some time for the Action Group, (AG) to be able to penetrate the entire Ekiti province for no other reason that the initial Ado support for the NCNC. Not until the trend was broken was AG, which came to Ado in the 1940s, able to overwhelm Ekiti area.

In 1955, for instance, one of the first major political contests took place between Awodimula from Ode Ekiti, Chief Familoni from IdoEkiti and JE Babatola from Ado Ekiti. Babatola won in the AG primary and won the main election.

Ado had 59,480 votes, Ijero 26, 589; Ikole 26, 252 with Ikere at a distant 25,889. There is the fear that irrespective of the contradictions, if APC picks a candidate from Ikere, the votes will be shared decisively between the APC and the PDP whose candidate is also from Ikere.  Picking a candidate elsewhere apart from Ado will strengthen Fayose who is waiting in the wings to pick his deputy from Ado-Ekiti. The only way to neutralize him is to pick the APC candidate from Ado.

Primary elections are often determined first by kinsman loyalty of delegates. As it is, Ado presents a strategic posting as the most audacious bride.While Ikere has not produced a governor in Ekiti, it has produced the governor of old Ondo State. Ado has neither produced the Governor of Ekiti nor the governor of old Ondo State. Most of most significant towns have cultural and blood-bound ties with Ado. The cultural institutions in Ado historically has unprecedented network across the towns and villages in Ekiti which has been energized since Ojudu joined the race for overwhelming victory. It must be noted that in the past, Ado often deliberately play the role of the kingmaker by refusing to produce a governorship aspirant, but this time around, the entire city  with a zeal and determination never before seen, has chosen Senator Ojudu as the one and only aspirant on the platform of the APC. Good enough for the APC, Ojudu has a rich history of radical struggle, consistency, bravery, iron-cast nerve and infact, he is the lion that can scare stiff Fayose and his agent.  He performed this same feat in 2011 when he scored 64,000 plus votes in the Senatorial election dusting Fayose almost thrice. Certainly, the clincher of the APC will be to pick its candidate from Ado-Ekiti. Omission of this calculation will be another costly error that may plunge the APC into another whirlwind of regret and defeat. Fayose is like a vulture, hovering to see if on May 5, APC will bring forth another carcass in the form of a weakling that will give him another cheap victory. A candidate from Ado is one sure way to cut down the PDP like grass and make it wither like a flower without nurture. The APC leadership has the choice to make or mar. [myad]