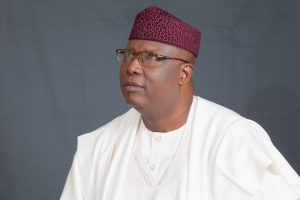 “If we don’t tackle this problem now, help this people out, our children will not be able to visit this place, not to talk of live here in the future.” These were the exact words used by Senator BabafemiOjudu in a prose elegy he wrote for late Olufunmilayo Adunni Olayinka, who died while serving as deputy to the immediate past governor of Ekiti State, Dr John Kayode Fayemi.

Ojudu titled the elegy ‘Adunni: The journey of an accidental politician’. Though he claimed the words were not his and he credited them to the late deputy governor, who happened to be a native of Ado Ekiti like him, they could as well be described as a retrospection of sort. Due to some characters displayed by Ojudu over time, which people have described as alien to political conducts, it might not be wrong for the Senator and Special Adviser to have on different occasions asked himself why he was venturing into the rough tidal terrain of Nigerian politics. But, again, Senator Ojudu is a resolute fighter, who would not give up on his conviction. He would have consoled himself with the words of the legendary Plato that one of the penalties for refusing to participate in politics is that one ends up being governed by one’s inferiors.

From being a journalist to a human rights activist to a pro-democracy activist to a reformer, then a Senator and currently a Special Adviser to the President of Nigeria on Political Matters, Ojudu’s journey of becoming a politician is a highly inspiring one. Though he is neither an infantile democrat nor a rookie progressive, his venturing into politics must have been informed by the belief that politics was too serious a matter to be left to the politicians. His mindset has always been that whenever the rights of one man are threatened, the rights of every man are diminished. This explains why he has contested and won an election before, and has, as well, been appointed a political adviser. He is well-known for his innovative ideas and initiatives raising revolutionary consciousness in people.

As Ekiti State goes in search of a governor that will right all the wrongs of the incumbent AyodeleFayose, and as the progressives in the All Progressives Congress jostle for the single ticket, which would serve as the ace, certain factors must notch an aspirant above others. And when one thinks of the character traits that make a good politician like integrity and optimism, Senator BabafemiOjudu soars shoulder high above the rest aspirants, especially considering the following factors that can just not be overlooked:

Senator Babafemi Ojudu rates very high among those who fought for the return of democracy in Nigeria as currently being enjoyed. Even as a journalist, Ojudu played a very active part in not only reorientating journalists in the country towards emancipation from dictatorship, but confronting the military dictatorship headlong. He was unfairly incarcerated for fighting for the entrenchment of democratic rule in Nigeria. He suffered other forms of persecutions, but his spirit remained non-shattered until democracy was achieved.

In everything he does, Ojudu puts boldness into it. Boldness in this contest doesn’t mean being rude, obnoxious, loud, or disrespectful. Rather, Ojudu’s boldness makes him to be firm, sure, confident, fearless, daring, strong, resilient, and not easily intimidated. It means he is ever willing to go where he has never been, willing to try what he has never tried, and willing to trust the team he leads that they will always trust his leadership. Ojudu’s boldness is an honest one, and it comes to him naturally. It is roused by the assurance that he is always doing his best to right the wrongs. For instance, when Babangida said he was interested in running for president in the 2011 democratic elections, Ojudu, yet a journalist, boldly said that the second coming of Babangida to rule the nation should be resisted by every Nigerian who wanted progress for the country. In his words, “Babangidadoes not have anything good to offer us. We have suffered enough in his hands… He is a trickster. Look at how many journalists were killed during his time. Look at what he did to our colleagues (journalists)… Look at what happened to our institutions when he was around. He destroyed the system and he is now seeking to come back”.

Everyone who has ventured into pursuing a course alongside Ojudu will attest to his doggedness and tenacity. According to Malcolm Gladwell, success is a function of persistence and doggedness and the willingness to work hard for twenty-two minutes to make sense of something that most people would give up on after thirty seconds. That is BabafemiOjudu for you. He is determined. Even in the face of setbacks, you will find him displaying a high dose of enthusiasm and persistence. His never-say-die spirit is not only legendary but contagious, as he would always encourage those around him never to give up. Ojudu remains the only person within the progressive fold that has beaten Fayose hands down in a political contest. In the April 2011 election for the Ekiti Central Senatorial seat, Ojudu polled 67,747 running on the ACN platform to beat Ayo Fayose, then Labour Party (LP) candidate and former Ekiti State Governor to a distant third with 29,773 votes. This is the only political dent that Fayose has to date, and which has kept him shut from boasting that he is unbeatable in Ekiti politics.

Ojudu is straightforward and has come to challenge the assumption that an honest politician is one of those oxymoron that people don’t dare fantasize about. Alongside the first two traits, he displays a high sense of integrity, which may have been his source of boldness. One of the truest tests of integrity is its blunt refusal to be compromised. With integrity, Ojudu has not and cannot be compromised. He has nothing to fear, and he has nothing to hide. His character reads like an open book. Like Bob Marley once observed, the greatness of a man is not in how much wealth he acquires, but in his integrity and his ability to affect those around him positively.

If indeed tyranny of the majority counts as an inherent weakness of direct democracy and majority rule in which the majority of an electorate can and does place its own interests above, and at the expense of, those in the minority, then one would need to take the voting demography of Ekiti, with the domination of Ado Ekiti, serious as the state approaches the next governorship election.

More than 60 people are jostling for the Ekiti governorship seat just in all the political parties fielding candidates. 33 of them are vying for the single slot within the APC. Yet among all of them, only Senator BabafemiOjudu is contesting from Ado Ekiti, the one-town local government area and state capital, with the highest voting capacity of 180,000. Ikere, which comes next to Ado with 55,000 voting capacity, has the highest number of aspirants for the coveted seat, including Fayose’s deputy and surrogate, Professor KolapoOlusolaEleka of PDP. Segun Oni is from Ifaki in Ijero Local Government and he has other aspirants to contest with from his LGA. Fayemi, who is from Oye Local Government will be slugging it out with no fewer than five other aspirants from his local government. So are all others, except Ojudu who is standing as the lone runner from Ado Ekiti. This cannot be explained off as a mere coincidence, but as a deliberate attempt by the people of Ado to pack their political strength behind their courageous son, thus may have discouraged any other indigene from pitting against Ojudu.

Apart from these factors that may count in the build up to the 14 July governorship election in Ekiti State, Senator BabafemiOjudu also has some character traits that should be taken into consideration in determining who the governorship cap fits. They include honesty, intelligence, good instincts, diplomacy, loyalty, passion, team spirit, listening skills and empathy. [myad]