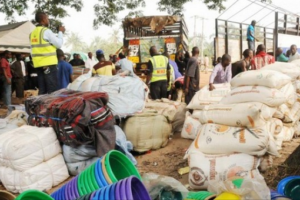 The Aliko Dangote Foundation has flagged off its 2018 Ramadan Food distribution scheme, just as it doles out a staggering N7 billion to suppor the Internally Displaced Persons (IDPs) in Borno State.

This is coming, according to a statement by the communications department of the Dangote Group, as the Foundation will, next month, commission 200 housing units worth N2billion built by the Aliko Dangote Foundation.

The statement said that the food distribution exercise will cost the conglomerate N150illion, quoting the Managing Director/CEO of Aliko Dangote Foundation Zouera  Youssoufou.

Ms Youssoufou who spoke yesterday, Monday at the flag-off ceremony in Maiduguri, Borno State Capital said the items that were being distributed to the IDPs include: Rice, Sugar, Salt, Spaghetti, Semolina, Wheat Meal, Maize and Millet.

She said the philanthropic exercise was meant to complement the effort of both State and Federal Government.

“We are supporting government reconstruction and rehabilitation effort,” she said, adding that about N7billion relief items have so far been donated to the cause of the IDPs in the state.

Mrs. Youssoufou, who was represented at the event by the Programmes Operations Manager of the Foundation Musa Bala said the gesture was a continuation of Foundation’s charity works in the state.

In his speech, Governor Kashim Shettima said the Borno State Government and its people were grateful to Dangote for the gesture.

He said that Dangote is the single largest benefactor of the IDPs after the Federal and state governments since the emergence of insurgency in the Northeast.

The Governor stated that Dangote’s contribution does not only stop at feeding and clothing the IDPs which he has been doing over the years, it also stretches to resettling and rehabilitating them.

Also in her remarks, the Chairperson of the State Emergency Management Agency, Hajiya Ya Bawa Kolo, expressed appreciation to the Foundation on behalf of the Internally Displaced Persons.

She assured the governor that the Agency will work with the Aliko Dangote Foundation’s team to ensure that only deserving persons will benefit from the gesture.

The Governor and other dignitaries later inspected the Dangote Housing Estate which will be commissioned by Alhaji Aliko Dangote next month.[myad]