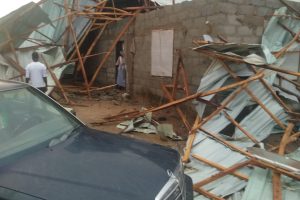 Tempest storm yesterday, April 11, ravaged the house of a retired Deputy Superintendent of Police (DSP) Ahmed in Chibiri, the suburbs of Kuje Area Council of the Federal Capital Territory ( FCT). The entire roof of the house was practically brought down completely.

However, no one in the edifice was injured.

Reacting to the incidence in a phone conversation, retired DSP Ahmed, who traveled outside Abuja a day before, lamented the damage. 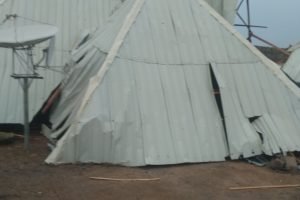 He said that he poured all his financial benefits from his 35 years in the service of the nation into erecting the house, wondering where would he begin from again after such colossal loss.

Meanwhile, his two wives, children and other dependants who escaped unhurt in the devastation are now taking refuge in neighbours’ houses.