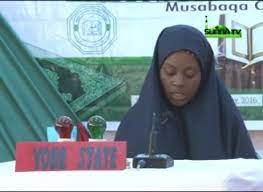 A young lady, Aisha AbdulMutalib, has been given a house and 2023 Hajj seat along with her husband to Saudi Arabi, after emerging the overall national winner of the National Qur’anic recitation competition with tafsir (interpretation of the words of the Holy Qur’an) in Sokoto.

Governor Mai Mala Buni of Yobe State, who announced the gift of a house and Hajj seat to Aisha at the end of the competition, also appointed Aisha, from Potiskum Local Government Area, as a liaison officer on Quranic recitation and awarded her a scholarship to further her studies.

Similarly, the governor approved hajj seats for officials who accompanied her to the competition in Sokoto.

Governor Buni expressed delight with the performance of Aisha, saying that she had done the state proud.

He stressed the commitment of his government to provide quality lslamic and Western education across the state.

The governor said that Yobe State, as part of the old Ngazargamo Empire, was known for Islamic knowledge and would uphold the legacy of the empire.