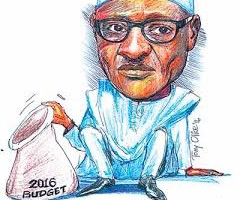 While some economists, academics and other Nigerians have described the 2021 Budget Proposal placed before the National Assembly by President Muhammadu Buhari on October 8, 2020, as a budget of hope, the Presidential candidate of the opposition Peoples Democratic Party (PDP) in the last election, Atiku Abubakar has described it as a “very grave and perhaps disturbing.”

A renowned scholar and economist, Dr. Abdulmaji Jamal, in an interview with the News Agency of Nigeria (NAN) in Bauchi described the N13.8 Trillion budget estimate as realistic.
He explained that the benchmark of N379 to a dollar as envisaged by the estimate is reasonable, considering the nation’s dwindling oil revenue which may appreciate or indicate otherwise.
He said that the 11.9 per cent inflation target of the expected annual expenditure was also reasonable.
“But we must expect a significant reduction in the prices of consumables especially foodstuff,” he said.
Similarly, Dauda Mohammed, a civil servant expressed optimism that the price of oil in the international market would appreciate and the budget target could be achieved as envisaged or even better.
He added that the budget which was projected at the N 4.4 trillion deficit would definitely see the light of the day through exploiting the various existing revenue sources and blocking of leakages.
Also, Alhassan Ibrahim, a businessman lauded the president for such an ambitious budgetary allocation.
He said that the N420 billion and the N20 billion earmarked for the social investment and housing programmes would likely generate employment and provide sufficiency in shelter.
Ibrahim called on the government to ensure full implementation of the budget while calling on the national assembly to ensure speedy and timely passage of the budget into law for development.
And, in his reaction to the budget proposal, Atiku, in a statement he personally signed further looked at the budget as unpatriotic, and that “it will also be catastrophic for our nation’s economy.”
Full text of Atiku’s statement is reproduced here:
Looking at the 2021 Budget Proposal placed before the National Assembly by President Muhammadu Buhari on Thursday, October 8, 2020, a number of issues, very grave and perhaps disturbing issues arise.
I could bring up several of them, but for the sake of its direness and consequence to our economy, permit me to address one very important issue.
The budget deficit in the proposal is ₦5.21 trillion. This amount is just over 3.5% of Nigeria’s 2019 GDP. This is contrary to the Fiscal Responsibility Act of 2007, which provides in Part II, Section 12, subsection 1 that: “Aggregate Expenditure and the Aggregate amount appropriated by the National Assembly for each financial year shall not be more than the estimated aggregate revenue plus a deficit, not exceeding three per cent of the estimated Gross Domestic Product or any sustainable percentage as may be determined by the national Assembly for each financial year.”
Nigeria had a GDP of approximately $447 billion in 2019. Three percent (3%) of this amount is $13. 3 billion, which at the current official exchange rate of ₦379 to $1, gives you a figure of ₦5.07 trillion.
So clearly, the budget deficit of ₦5.21 trillion, as announced by President Muhammadu, is above 3% of our GDP and is therefore in contravention of the Fiscal Responsibility Act of 2007.
Even more disturbing is the fact that our GDP has fallen sharply from its 2019 figures, and has been projected by the World Bank and other multilateral institutions at somewhere between $400 billion and $350 billion. Meaning that in actual sense, the ₦5.21 trillion budget deficit is actually far above the 3% threshold stipulated by the FRA.
“That this escaped the notice of the Buhari administration shows a glaring lack of rigour in the formulation of the Budget. A very disturbing development.
Furthermore, this deficit shows the precarious state of our national finances, which have since been overburdened by excessive borrowing on the part of the Buhari administration.
It has not escaped my attention that the Fiscal Responsibility Act of 2007 makes provision for the National Assembly to raise the threshold of the budget deficit from 3% to a higher figure. However, if this is done, they will be serving this administration’s interests, not Nigeria’s, because the Act says that such a threshold must be sustainable. Is it sustainable when our budget makes almost as much provision for debt servicing, as it does for capital expenditure?
As such, I call on the President, to recall this budget, and recalibrate it to reflect the provisions of the Fiscal Responsibility Act of 2007, and the current economic realities of the nation. To do otherwise will not only be unpatriotic, it will also be catastrophic for our nation’s economy.