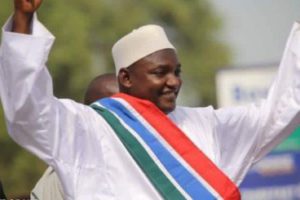 Adama Barrow, the Gambia’s president-elect, is the man who has defied all odds to lead Gambia out of the “strangle-hold” of Yahya Jammeh, who has ruled and dictated to the country for 22 years.

Born in February 1965 in a small village near Basse, The Gambia, the 51-year-old politician attended the local Koba Kunda Primary School and then Crab Island Secondary School in the state capital.

As a bright student, Barrow received a scholarship for Muslim High School, and worked immediately after graduation, at Alhagie Musa & Sons, where he later became the sales manager.

He later moved to London at the turn of the millennium, where he studied for a degree in real estate while working as a security guard to finance his studies.

He was a guard at Argos catalogue store in north London, where he was a staunch Arsenal fan with a keen eye and sense of security.

British media has even reported that while guarding the shop on Holloway Road, he made a citizen’s arrest on a shoplifter, which resulted in a six-month jail term.

He returned to The Gambia in 2006 and started Majum real estate, where he was the chief executive officer until his election as president.

Like Donald Trump, Barrow is a real estate mogul, who never held any political office before becoming president, against all odds.

At the final count of Gambia’s 53 constituencies broadcast on state TV, Barrow had received 263,515 votes, compared to Jammeh’s 212,099 and 102,969 votes for Mammah Kandeh, the leader of the only opposition party, which refused to back Barrow.

Unlike Trump, Barrow is a devout Muslim, with two wives and five children.

In Nigeria, the Peoples Democratic Party (PDP) had led the country for 16 years, and virtually handpicked the country’s next president, until Muhammadu Buhari.

Like Buhari, who was presented by a coalition of parties, Barrow was backed by every opposition party in the country — save one. Barrow, also like Buhari, came, preaching change to every citizen of the west African country.

“Gambia is going very wrong under Jammeh. He is a one man show who is dictating everything,” he had said.

“Gambia has become one of the poorest countries in the world, with one of the worst human rights records, but because of his own selfish interests he has continued to impose himself.

“The entire development of the country ranging from agriculture to human rights is going down the drain and this is why the people are yearning for change. Farming has been a source of income in this country and if elected my government will invest heavily in this sector.”

The same kind of message that brought Buhari to power — historically. [myad]