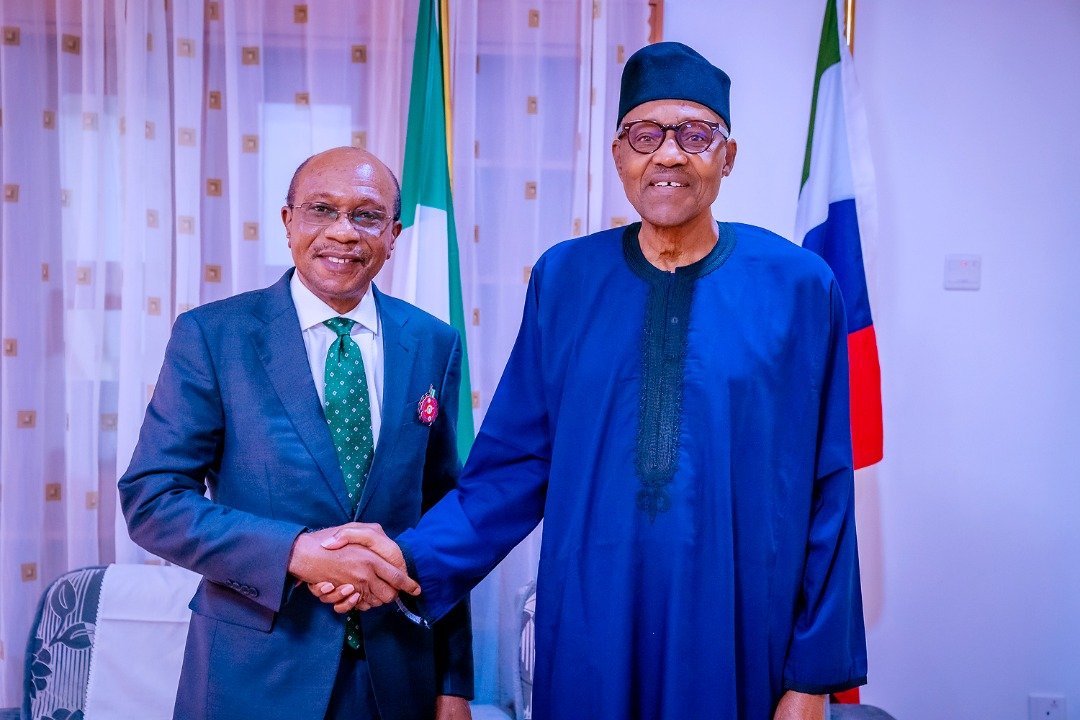 Governor of the Central Bank of Nigeria (CBN), Godwin Emefiele has dispelled the wide spreading fears over the policy of cashless economy that has just begun with redesigning of the naira notes and placement of cash withdrawal limits.
According to the apex Bank boss, between 2012 and now, 2022, a lot of electronic channels have been put in place that will aid people in conducting banking and financial service transactions in Nigeria.
“We heard people talk about some of the people in the rural areas and the truth is that even online banking, as I was coming out to Daura, I saw a kiosk that has super agent today. It’s because of the way we felt that there was a need for us to deepen the payment system infrastructure.
“We have 1.4 million super agents that are all over different parts of the country, all local governments and all villages in this country.”
Emefiele, who spoke to newsmen today, December 8 in Daura, Katsina State shortly after visiting to, and briefing of, President Muhammadu Buhari, said that some of the names of the agents are already on the CBN website “and we will publish all the names of all the super agents.”
He said that having super agents is different from the banks, microfinance banks and other financial institutions.
“Having 1.4 million of them is as good as having 1.4 million banking points where people can conduct services. ”
Responding to the Senate whose members raised eyebrows yesterday, December 7 on the withdrawal limits, the CBN governor said that as the legislative arm of the government, the CBN would from time to time brief them about what is happening and about the policies.
“And I’m aware that they have asked for some briefings and we will brief them.
“But I think it’s important for me to say that the cashless policy started in 2012. But almost three to four occasions, we had to step down the policy because we felt that there is a need for us to prepare ourselves and deepen our payment system infrastructure in Nigeria.”
He said that Nigeria as a big country, the biggest economy in Africa, needs to leapfrog into the cashless economy.
“We cannot continue to allow a situation where over 85 per cent of the cash that is in circulation is outside the bank.
“More and more countries that are embracing digitization have gone into cashless. “And I said it at different fora, that this is not targeted at anybody; it’s just meant for the good and development of the Nigerian economy and we can only continue to appeal to Nigerians to please see this policy the way we have presented it.
“We will be reviewing from time to time how this is working because I cannot say that we are going to be rigid. But it is not to say that we will reverse, it is not to say that we will change the timing, but whether it is about tricking some amount to be a little bit higher or a little bit lower, and all the rest of them.
“We will do so because we are humans. We want to make sure that we make life good for our people. We do not want to make life difficult for them.
“So’ there is no need for anybody to worry. The central bank is monitoring what is happening and I can assure everyone that we are up and alive to our responsibilities and we will do what is right for Nigeria and Nigerians.”
Emefiele assured that the CBN is more than prepared to handle the situation “because, I said on December 15 when we announced it, that December 15 is when we will issue the cash but we have to move it forward because it leaped.
“The President launched it in November 26 instead of December 15 that the President unveiled it. And I just told you now that yesterday, the banks have received the new cash and they have started dispensing them.
“I can only just assured you that it will come round. Let us just be calm, luckily the old currency will continue to be legal tender till January 31, 2023. So, I want to crack a joke: both the painted (new notes) and unpainted (old notes) will operate concurrently as a legal tender. But by January 31, the unpainted one will not be useful to you again.
“So, please take it to your bank as quickly as possible.”
On how much of the old notes have been returned to the banking system, the CBN boss said: “we have taken more than have a trillion and in the bank, we also have close to have a trillion.
“But what we have done in the central bank is to move more people from different departments into currency processing so that they can process this cash as quickly as possible and from there, banks can now move what they have with them.”
Emefiele said that he was in Daura to see the President and used the visit as part of the normal briefing that he used carry out.
“The briefing has been overdue and I thought that he should be briefed about what is happening in central bank and what is happening in the economy, and generally, recent happenings in the central bank of Nigeria and the Nigerian economy.”
He said that there are so many things happening concerning issues bothering on the currency and the fact that only yesterday, the new currency has now reached the banks “and we believe that the banks will begin to distribute these currencies to the members of the public who are their customers; and to assure the president that things are going on well about the currency as well as issues bothering on the cashless policy that we recently introduced.”
He said that president Buhari was very happy with his briefings, adding that he asked CBN to “carry on with our work. No need to fear; no need to bother about anybody.”