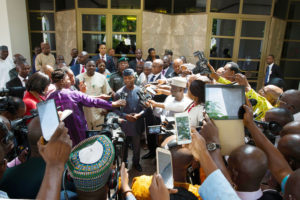 The 85-member State House Press Corps (SHPC) has unanimously passed a vote of no confidence on its leaders, led by Alhaji Ubale Musa of the Hausa Service of German Radio, known as Deutche Welle Radio.
At its Congress today, October 15, held at the FCT Press Centre in Abuja, the SHPC said that the vote of no confidence and dissolution of the entire executive was as a result of the fact that crisis had long enveloped the executive which has been unable to hold exco meetings in the past two years.
Overwhelming majority of the over 50 members who attended the congress, voted in favour of dissolution of the executive.
Congress then went on to set up an interim executive as transition committee, with Mr. Tony Ailemen of the Businesday as chairman “for a period not more than two weeks within which the next election will hold.
In the transition committee also are Mrs. Raliat Asenikan of the Classic FM and Adegboyega Arogbodo of Lagos Television (LTV)
This was even as an electoral committee was also constituted, with Felix Onuah of the Reuters as chairman. Other members are Shade Abdulsalami of MITV, Sani Tukur of the Premium Times, Ebuwa Osagie of AIT, Philip Nweli of Wazobia Fm.