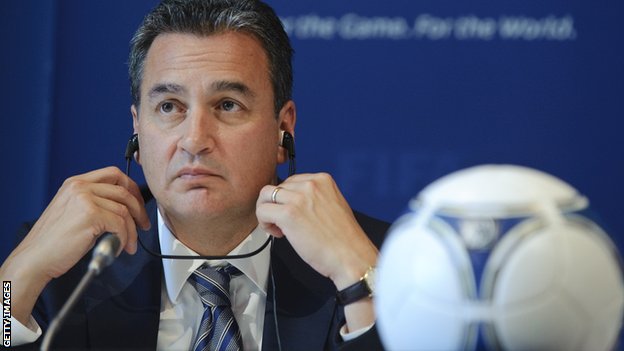 It was widely alleged in the media that a number of football officials took £3 Million in return for support of the Qatari bid.

And there are growing calls for the Gulf state to be stripped of the right to hold the tournament as allegations were rife that payments of millions of pounds were made to officials who supported its bid to host the tournament.

FIFA vice-president Jim Boyce says he would support a re-vote if corruption allegations can be proven even as Qatar’s 2022 bid committee denies “all allegations of wrongdoing.”

New York lawyer Garcia, who is due to meet Qatari officials in Oman, is already conducting a long-running inquiry into the 2018 and 2022 World Cup bids, the results of which were announced at the same time.

Prior to Qatar winning the right to stage the 2022 tournament, Russia was voted as host for the 2018 event.

Boyce said: “I certainly, as a member of the executive committee, would have absolutely no problem whatsoever if the recommendation was for a re-vote.

Former attorney general, Lord Goldsmith, a member of FIFA’s independent committee on governance, backed Boyce’s stance, saying: “If it is proved that the decision to give Qatar the World Cup was procured by – frankly one can describe it no other way – bribery and improper influence, then that decision ought not to stand.”

Football Association chairman, Greg Dyke has said that a new vote should take place if it was shown a “corrupt system” led to Qatar’s win, while UK Sports Minister, Helen Grant said it was “essential that major sporting events are awarded in an open, fair and transparent manner.”

The Sunday Times claims to have obtained secret documents that implicate the former Asian Football Confederation president in corrupting members of football’s governing body to win the right to stage the 2022 World Cup.

The newspaper alleges the documents, seen by BBC sports editor, David Bond, show that Qatari Bin Hammam, 65, was lobbying on his country’s behalf at least a year before the decision to award the country hosting rights.

A statement from the Confederation of African Football said the specific allegations against its president, Issa Hayatou, were “fanciful”, “ridiculous” and formed part of a “smear campaign” against him.

It added that Cameroonian Hayatou, a FIFA vice-prsident, categorically denied the allegations of corruption.

“Mr. Hayatou will not allow journalists once again to attack his integrity and reputation,” it read.

“Such allegations are meant to discredit not only him as a person but the whole continent.”

The committee also rejected claims Bin Hammam actively lobbied on their behalf in the run-up to the vote in December 2010.

It added it was co-operating with Garcia, insisting it will “take whatever steps are necessary to defend the integrity of Qatar’s bid”.

Qatar defeated bids from South Korea, Japan, Australia and the United States to win the right to stage the 2022 World Cup. [myad]