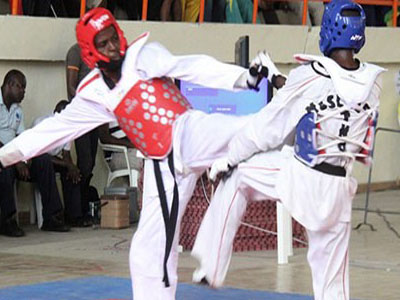 No fewer than 300 athletes drawn from Niger Republic, Mali, Ghana and host of this year’s All Africa Games, Congo Brazzaville, including Nigeria, are at present jostling for honours at the Lagos International Taekwondo Classics holding at the Teslim Balogun Stadium.

The taekwondists, made of 212 male and 88 female, will be aiming for the laurels at the N3.5million three-day tournament, organized by the Lagos State Taekwondo Association under the auspices of the Lagos Sports Classics and the Nigeria Taekwondo Federation (NTF).

President of the NTF, George Ashiru, said that the classicshas helped the country, especially in the Poomsae event.

“Through the classics, we have made some headway in the Poomsae event and we have won three gold medals at international tournament. This became possible through the efforts made by our national coach, Jim Beom Kim and this has fetched us three international gold medals.

“And this year has also ignited the interest of the athletes in Poomsae and this is a major plus to the classics. Despite the initial postponement, we still have the presence of teams from Mali, Niger Republic, Ghana and Congo Brazzaville. These teams are our possible contenders for medals at the 2015 All Africa Games and it is good that we can use this competition to assess them as well as tune up our athletes for the world championships holding in Russia,” Ashiru said.

The Commonwealth Taekwondo Union (CTU) Vice President explained that outstanding athletes from the classics would form the second tier of the national team. [myad]