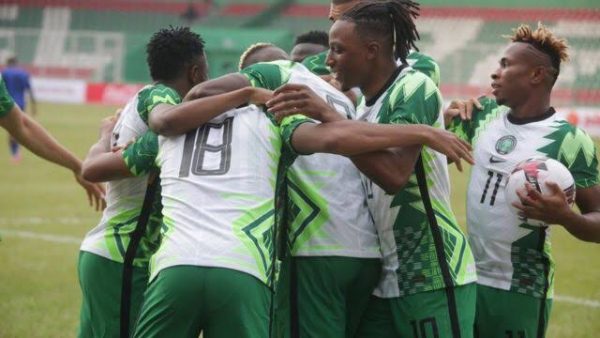 The Super Eagles of Nigeria made It to second round at the ongoing 2021 Africa Cup of Nations (AFCON), following a 3-1 win against Sudan at the Roumde Adjia Stadium, Garoua, this evening, January 15.
Samuel Chukwueze gave the Super Eagles the lead in the third minute after he was teed up by Moses Simon.
The Sudanese took control of the game afterwards and came close to equalizing on a couple of occasions.
Rangers midfielder, Joe Aribo came close to doubling Nigeria’s score line in the 37th minute, but failed to direct his effort on target.
Taiwo Awoniyi also missed another chance a minute later.
Awoniyi however added the second goal on the dot of 45 minutes after he was set up by Chukwueze.
The Super Eagles continued from where they stopped after the break with Simon netting the third goal in the 46th minute.
Walieldin khedr reduced the deficit for Sudan from the spot 20 minutes from time
Austine Eguavoen’s charges remain top of Group D with six points from two games.
Egypt and Guinea-Bissau will battle in the group’s other game later on today.
The Super Eagles will take on Guinea-Bissau in their final group game on Wednesday.
Source: Promptnews.