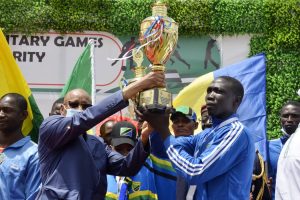 All the military personnel from the countries of Africa have just concluded sporting activities, tagged: “Abuja 2021”.
The event brought together members of the armed forces from different African countries with the goal of ensuring a united Continent.
The sporting activities, known as Military Sports in Africa (OSMA) Sahel Military Games tagged, “Abuja 2021” ended with Team Chad winning the first position in the game of football, while Team Cameroun and Nigeria clinched the second and third positions respectively.
In the 42.195 kilometer marathon race, Tanzania’s Michael Sangia and Jackhine Sakilu clinched the first positions in the male and female categories with returning time of two hours,19 minutes, 39 seconds and 2 hours, 43 hours, 35 seconds. 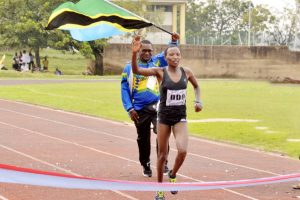 Also Tanzania’s Ezekiel Nigimba and Cameroun’s Foimi Justin clinched the 2nd and 3rd positions in the male race.
Tanzania’s Sisilia Ginoka and Ossou Wakaye of Congo clinched the 2nd and 3rd positions in the female category.
Speaking at the closing ceremony, according to a statement today, October 18 by the Deputy Director of Defence Information, Air Commodore Wap Maigida, the Minister of Science, Technology and Innovation, Dr. Ogbonnaya Onu and the Chief of Defence Staff members(CDS), General Lucky Irabor commended athletes that participated in the sporting activities
The Minister noted that Nigeria has made history for successfully hosting the first Sahel Military Games.
Dr. Onu attributed the myriad of conflicts and crises experienced in some parts of Africa as part of the challenges of nation building. He urged African countries to leverage on sports to galvanize the much needed sustainable friendship, brotherhood and solidarity which are the ingredients required in building a united, peaceful and prosperous Continent.
This was even as the Chief of Defence Staff (CDS), General Irabor commended the athletes for their sportsmanship during the event, saying that the main objective of the games in fostering unity, understanding and camaraderie within armed forces in the Continent was achieved. 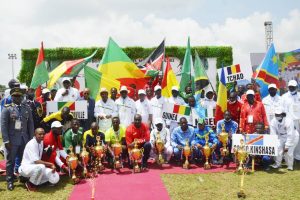 The Defence Chief said that the foundation of the Sahel games would foster future collaboration and cooperation among the armed forces in Africa.
According to him, this is in the area of using non-kinetic means to resolve the security challenges across the Continent.
The OSMA Secretary General, Captaine De Fregate Djendola Piere, commended Nigeria and its Armed Forces for demonstrating commendable friendship, fraternity and active solidarity through hosting of the games.
The OSMA Secretary General, thanked the Federal Government of Nigeria for supporting and promoting military sports within Africa as well as the development of OSMA.
Captaine de Fregate Pire also appreciated the CDS, Service Chiefs and other co-sponsors as well as partners for their support.
Highlight of the closing ceremony were the invitational relay race where athletes from the Nigeria Police Force and other paramilitary organisations participated.
Witnessed also were presentation of medals to the individual winners and trophies to the participating countries.
The OSMA flag was officially handed over to the Chadian Chief Delegate, whose country will be hosting the next edition of the games in 2022.
Notable dignitaries that attended the sporting event include; Deputy Governor of Nasarawa State, Dr Emmanuel Akabe, Chairman Nigerian Legion, Major General Abdulmalik Jubrin who represented the Minister of Defence while the Minister of Special Duties and Inter-Government Affairs, was also represented by his Chief of Staff.
Others were Service Chiefs, heads of security agencies, members of the diplomatic corps, traditional rulers, captains of industry and senior military officers, among others.