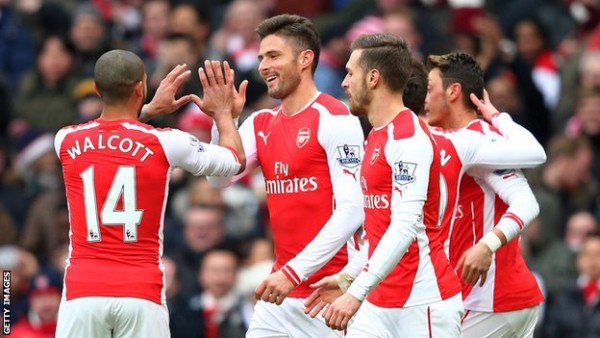 Arsenal became the most successful club in FA Cup history as they outclassed Aston Villa at Wembley, defeating it by four goals to nothing to earn Arsene Wenger a record-equaling sixth triumph.

The Gunners retained the trophy they won against Hull City a year ago to put Wenger’s total of wins alongside George Ramsay – who previously stood alone with the record for his victories with Villa between 1887 and 1920.

Arsenal’s 12th final victory was never in doubt as they dominated with a magnificent display, the only surprise being that it took until five minutes before half-time for their control to be rewarded with Theo Walcott’s goal.

Alexis Sanchez confirmed that superiority with one of the great FA Cup final goals shortly after the restart – a swerving, dipping 25-yard thunderbolt that flew high past startled Villa keeper Shay Given.

Villa were a shadow of the side that performed so impressively to beat Liverpool at Wembley in the semi-final, their flaws exposed ruthlessly as Per Mertesacker took advantage of an embarrassing lack of marking to head the third.

Substitute Olivier Giroud’s fourth in the final moments only completed what was a harrowing day for Tim Sherwood’s side, who had travelled to Wembley high on optimism and expectation after an impressive run to the final.

It was a day of triumph for Wenger, as he added another FA Cup to his three Premier League titles in a game that was a sharp contrast to the tension of last year’s final, when the Gunners had to recover from two goals down.

And Wenger recorded a tactical victory over Villa counterpart Sherwood, with his decision to use the pace of Walcott to take on Villa’s defence rather than the power of Giroud reaping rich rewards.

Sherwood’s big selection call – to play Charles N’zogbia ahead of Gabriel Agbonlahor – never looked like working. By the time the latter was introduced, just after Arsenal had gone two up, the horse had bolted for a Villa team that simply never performed.

Arsenal’s season can now be judged as a success, with the trophy adding to a third-placed finish in the Premier League that assured Champions League football again.

This was a day of unrelenting misery for Sherwood and his players – watched at Wembley by owner Randy Lerner, who was sitting next to Villa fan Prince William.

They will have to regard Premier League survival as their success this term, which was the main priority when the manager replaced Paul Lambert in February.

Villa ended the league season by being thrashed 6-1 at Southampton and losing at home to relegated Burnley and the ominous signs of those performances were flagged up once more as Arsenal’s pace and mobility ran them ragged.

Goalkeeper Given showed great athleticism to save from Laurent Koscielny, and Kieran Richardson blocked crucially from Walcott as he looked certain to score.

Just as it looked as if Villa would somehow survive until half-time, Arsenal got the breakthrough they deserved, Walcott thumping a finish past Given at his near post after Sanchez headed down Nacho Monreal’s cross.

Before Villa could regroup after half-time, Sanchez effectively settled the contest with a magical FA Cup final moment, sending a bullet finish high past Given with the keeper barely having time to react.

Villa, pretty much as they had looked from the first whistle, were shell-shocked and Mertesacker was allowed by Christian Benteke to rise unmarked and head in the third.

The formalities were completed with virtually the last kick of the game when Giroud turned in Alex Oxlade-Chamberlain’s cross in front of a rapidly-emptying Villa end, with their supporters having had little more than a couple of half-hearted penalty appeals to sustain them.

Wenger took the applause of Arsenal’s fans before the trophy was presented – the manager who has had so many doubters delivering his answer with another piece of silverware.