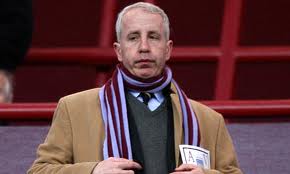 Owner of the Premier League team, an elite soccer club, which finished 15th this season, Ashton Villa, Mr. Randy Lerner has placed the team in market for the sum of $300 million.

Lerner, an American businessman who is worth about $2 billion, decided to sell the team after eight years of ownership and it after what he calls “seemingly constant rumors” circulated about his future with the Midlands club.

In a statement today: “I have come to know well that fates are fickle in the business of English football. And I feel that I have pushed mine well past the limit. The last several seasons have been week in, week out battles and having now come through this last season unfortunately limping amidst very meaningful injuries and constant sale rumors, I feel further that now is the time for me to look for new ownership and thus new leadership.”

Lerner has engaged Bank of America Merrill Lynch to advise on the sale of the team, according to his statement.

As to possible buyers of Aston Villa, right now it could be just about anyone with deep pockets. The English team could even stay in American hands. Billionaires in the United States are increasingly scooping up Premier League teams. Business mogul Malcom Glazer and his family, worth $4.5 billion, owns Manchester United; entrepreneur Stan Kroenke, worth $4.7 billion, is the largest shareholder of Arsenal; investor John Henry, worth $1.7 billion, owns Liverpool; and businessman Ellis Short, worth $1.4 billion, owns Sunderland.