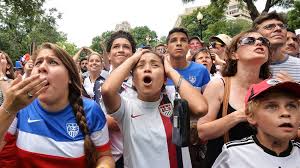 Brazil’s World Cup dream crumbled in spectacular fashion on Tuesday in a record 7-1 semi-final defeat. Here is a blow-by-blow account of a Germany’s night of triumph:

Brazilians wondered how their team would cope without the injured Neymar, but the absence of captain Thiago Silva, such a reassuring presence at the back, was just as big a blow.

The Brazilian defence was hopelessly exposed at the opening goal, as Toni Kroos floated in a corner from the right and Thomas Mueller found himself completely unmarked at the back post to slot home his fifth goal of the tournament.

However, the movement by Mueller and the German players was intelligent as David Luiz, who should have been marking the goalscorer, found himself blocked off and unable to make a challenge.

The crumble really began as Fernandinho failed to cut out a pass from the German right, and Kroos and Mueller combined to cut through the middle of the Brazil defence.

Klose collected the ball inside the area and saw his shot from close range blocked by Julio Cesar, but he still reacted the quickest to convert the rebound.

The veteran striker confirmed himself as the greatest poacher in the history of the competition, scoring a record-breaking 16th World Cup goal to move one clear of the Brazilian Ronaldo, compounding the hosts’ misery.

Almost immediately after the restart, Germany scored again through a combination of poor defending and marvellous finishing.

Nobody cut out Philipp Lahm’s low centre in from the German right, and even after Mueller mis-hit his shot, the ball came to Kroos.

The Bayern Munich man’s connection, first-time on the half-volley with his left foot from the edge of the area, was marvellous and Julio Cesar could do nothing.

Fernandinho was hopelessly caught in possession just outside his own area, and Kroos and Sami Khedira took advantage to break into the area.

Khedira returned the ball to Kroos, who this time simply could not miss.

The culmination of an extraordinary first-half burst that will go down in history came as Mats Hummels sliced right through the heart of the Brazilian team, riding unchallenged deep into the opposition half.

Germany simply walked the ball into the net this time, with Mesut Ozil providing the assist and Khedira applying the finish.

Brazil attacked after the break in a doomed attempt to rescue some pride, but they still had six defenders in their own area when Germany went on to add a sixth goal midway through the second half.

Schuerrle, who had replaced Klose 11 minutes earlier, still found himself in space in the box to convert Lahm’s cutback, as Brazil were yet again found wanting on the left-hand side.

Mueller turned provider this time to set up Schuerrle to score again, and his delightful control was followed by an arrowing left-foot shot on the half-volley that beat Julio Cesar and went into the net off the underside of the crossbar.

Oscar’s late reply for the hosts was irrelevant, with Brazil already having succumbed to their greatest ever humiliation. [myad]