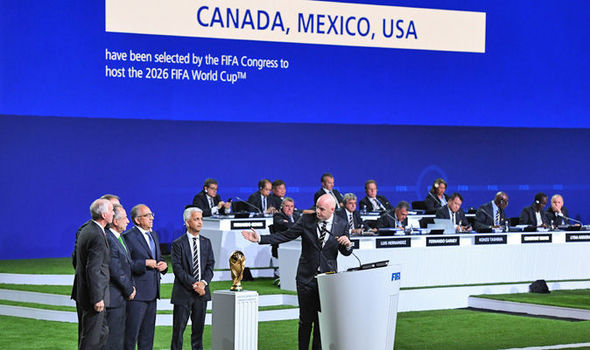 The United States, Canada and Mexico will jointly host the 2026 World Cup tournament after beating Morocco in its bid to host it. The ‘United 2026’ bid was selected by Fifa member nations, winning 134 votes compared to 65 for Morocco.

The 2026 tournament will be the biggest World Cup ever held – with 48 teams playing 80 matches over 34 days.

Of the 211 Fifa member nations, 200 cast a vote at the 68th Fifa Congress in Moscow today, Wednesday, with the winning bid needing a majority of 104.

Canada, Mexico, Morocco and the US were exempt, while Ghana was absent after the country’s government said it had disbanded its football association amid allegations of “widespread” corruption.

Three US territories – Guam, the US Virgin Islands and Puerto Rico – were among the other member nations to not vote.

Of the 16 host cities, 10 will be in the United States while the remainder will be split evenly between Canada and Mexico.

Sixty matches will take place in the US, while Canada and Mexico will host 10 games each.

The final will be held at the 84,953-capacity MetLife Stadium, which is home to NFL sides the New York Giants and the New York Jets.

The distance between the most northern host city (Edmonton) and the most southern (Mexico City) is almost 3,000 miles, which compares to 1,900 miles at this month’s tournament in Russia.

The tournament will mark the first time a World Cup has been shared by three host nations.

The 1994 World Cup, staged by the US, had the highest average attendance in the tournament’s history, while Mexico was the first nation to host the event twice.

US Soccer: “Hosting the 2026 Fifa World Cup is a rare and important moment to demonstrate that we are all truly united through sport.

“We are humbled by the trust our colleagues in the Fifa family have put in our bid, strengthened by the unity between our three countries and the Concacaf region and excited by the opportunity we have to put football on a new and sustainable path for generations to come.”

Morocco Federation: “I wish to congratulate Fifa for the conduct of this process and congratulate the president for what he has done in order to move things towards more transparency and more inclusion.

“I would like to reaffirm the determination of my country to continue to work for football and realise one day our dream to host the World Cup in Morocco.”

The Football Association (FA): “We congratulate the USA, Canada and Mexico on winning the bid to host the 2026 Fifa World Cup. Both bids were of a very high quality and we welcome the fact that the bidding process was both open and transparent.

“We cast our vote for the ‘United’ bid as we believe the independent technical assessment made its advantages very clear. However, it is important to note that both bids were deemed to have met the hosting requirements and a tournament in Morocco, close to Europe and in a country that loves football, had a great deal for English football fans to be excited about.”

Morocco’s bid faced unwanted attention when Fifa secretary general Fatma Samoura was the subject of an investigation into an alleged conflict of interest.

She was cleared of any wrongdoing and dismissed the claims as “laughable” and “unfortunate”.

The same evaluation task force later expressed concerns over stadiums, the availability of accommodation, and the travel network, despite ratifying their proposals.

Nine of the 14 stadiums included in Morocco’s bid were yet to be built, while the remaining five required “significant renovation or upgrading”.

But bid chief Hicham el Amrani said he was confident the country’s infrastructure “could deliver” and made play of the North African nation’s position, nine miles from the southern tip of Spain – dubbing it a “European” World Cup.