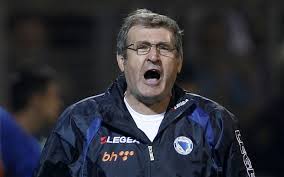 Head Coach of Bosnia and Herzegovina, Safet Susic has boasted that his team cannot afford to lose to Supper Eagles of Nigeria in their Saturday’s second group match in the ongoing World Cup tournament in Brazil.

Susic, who spoke to newsmen shortly before departing Guaruja for Cuaiba where they are expected to tackle Nigeria in their second group game, said: “We cannot afford to lose to Nigeria. A tie still keeps us in the running, that is why we cannot afford to rush forward without a concrete approach and attack at all costs.We must play well, organized, and with a plan in mind, in order to get the win.”

Susic’s team needs at least a draw against Nigeria after losing to Argentina in their first game to keep their World cup campaign alive and Susic admitted they can’t afford to lose.

He stressed that his team is very much ready for Nigeria, adding that he expects an open match, since the Nigerians need a win as well.

“As far as the lineup is concerned, I will see. There is still time.  We will most likely see a new player in the starting lineup.”