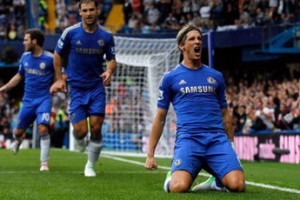 Chelsea Football Club and its fans across the world went wild on Tuesday night when it sent out tough Paris Saint-Germain at Stamford Bridge in London in the European Champions League quarter-final second leg.
Chelsea needed two goals to overcome the 1-3 first leg loss to hit the semi-final and at the end of the match Tuesday night, it recorded a goal in each half, giving an aggregate of 3-3 result. It qualified via the away goal rule.
Chelsea star began to shine when Schurrle, who replaced injured Hazard, netted the opener in the 32nd minute.
A long throw from Ivanovic on the right, a flick on by the head of David Luiz, and a calm first-time finish from 12 yards by Schurrle as the ball dropped onto his right foot did the magic.
A substitute, Demba Ba struck again in the 87th minute to seal the Blues’ qualification.
A long ball into the box had met back Azpilicueta, whose 20-yard shot deflected across the box. Ba, lurking at the far post, reacted quicker than Maxwell and dragged it over Sirigu from six yards. With that goal, the Londoners zoomed into the semi-final of Europe’s most glamorous club competition.
In the other second leg quarterfinal, Real Madrid survived Borussia Dortmund’s scare to secure a place in the semi-finals. They lose 0-2 but came on top of the German side on 3-2 aggregate.