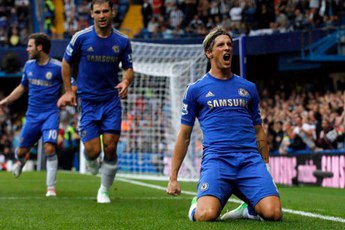 Chelsea managed to scale through what looked an embarrassing crushing defeat in the hand of third-bottom Cardiff Cardiff City by ending the duel 2-1 in the English Premier League (EPL) today, Sunday.

Chelsea’s captain, Azpilicueta dragged headed goal that appeared to be offside even as the completed the fightback, as substitute Loftus-Cheek stormed in at the back post to plant a header in the bottom corner.

Maurizo Sarri’s Chelsea stayed sixth in the table with 60 points, level with fifth-placed Arsenal, who have played a game fewer, and a point behind Manchester United in fourth.

Cardiff’s plight looks increasingly bleak as they are now five points adrift of the safety zone with seven games remaining.

Chelsea, who started without talisman, Eden Hazard and midfielder N’Golo Kante, struggled to create chances and failed to hit a single shot on target in the first half.

Aron Gunnarsson’s long-throws for striker Oumar Niasse troubled the Chelsea defence for the majority of the match and it was key to Cardiff’s breakthrough just after the interval.

The visitors failed to clear the delivery launched into the box, leaving midfielder Harry Arter to whip the ball back in for Victor Camarasa.

He fired a first-time finish into the top corner.

The hosts had two penalty kick appeals turned down, with defender Sean Morrison tugged down by Marcos Alonso and Antonio Rudiger in two separate incidents.

“We worked three weeks for this but to get let down by decisions… No major decisions went for us,” Cardiff manager Neil Warnock said.

“It’s the best league in the world but the worst officials. They don’t understand what is at stake. They shouldn’t make mistakes at this level.

“My players feel like they have been kicked in the teeth. We’ve been kicked so many times. I don’t deserve officials like that today. There is no excuse for that, it’s criminal.”

Cardiff next face a trip to second-placed Manchester City on Wednesday, while Chelsea host Brighton and Hove Albion.