Home SPORTS David Mark To Eagles: I Know You Can Win World Cup With... 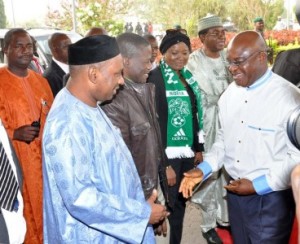 Senate President, David Mark, has expressed confidence that the Super Eagles of Nigeria have the capacity to win the World Cup if they exhibit their usual spirit of ‘never-say-die’ in the ongoing tournament in Brazil.
Senator Mark, who visited the Eagles players at the Victoria Hotel, in Campinas, Brazil, where they are currently camping, ahead of their first match against Iran on Monday, said that with the quality of players and the experience of the coaching team, Nigeria has what it takes to win the World Cup in Brazil.
“We have the quality of players to win the world cup” Senator Mark, who is the head of Nigeria delegation to the World Cup said. He added that the coaching team also has the best people in the world to guide the players to a successful outing in the tournament.
“You have to do your best to make us proud. We know you can do it and we are expecting the best from all of you.”
He appealed to the players and the coaching team to put aside any distraction at the moment and focused on the task of winning the trophy, even as he reassured them of the determination of President Goodluck Jonathan to give them the necessary support to excel at the tournament.
“The quality of people here led by myself show you that Mr. President and the over 170 million Nigerians have hope in you; that you will make us proud in Brazil.”
Senator Mark said that Nigerians are not expecting anything less from the players.
Also, the Minister of Sports, Dr. Tammy Danagogo commended the Eagles players and the coaching team for the efforts they have put in to get to where they are and advised them to do everything possible to make an impressive outing at the tournament.
The Head coach, Stephen Keshi pledged to lead Nigeria to victory.
“Sir, after we listened to you, we are motivated and if you look at the eyes of the players now, they are ready right now to kill. We assure you sir that we will do our best for the country.” [myad]