Home SPORTS We Are Not Here To Entertain Viewers, Stephen Keshi Assures Fans 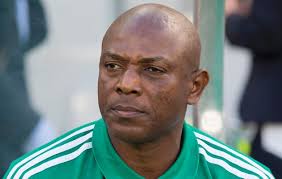 Stephen Okechukwu Keshi, the head coach of the Super Eagles of Nigeria has said that his major focus is to create a winning spirit in his squad rather than entertain viewers at the FIFA World Cup in Brazil.
Nigeria will face Iran today, June 16 at the Arena da Baixada in a Group F match of the 2014 FIFA World Cup, but the Big Boss said he will not be deploying any more aggressive tactics given the bevy of goals that have been scored.
“For me, scoring 100 goals is not important for me,” Keshi said.
“If we score one goal and I win my games up to the finals, I will love it, I will kiss you all over.”
“I don’t want to score 10 goals in one game then find I’m out in the next game, it doesn’t make sense.”
“Whatever comes I’ll take it as long as there is progression in my team.”
“So far in the tournament everything has been entertaining.”
“More players in attacking positions, playing good football because the audience needs to enjoy it.”
Despite conceding the current Nigeria team is ‘like a baby’, Keshi said his squad can usurp the efforts of the African nation’s first trip to a World Cup in 1994, when they reached the round of 16.
“It’s like a year and a half old team, the team of 1994 was like five or six years old,” said Keshi, who played in one group game in USA ’94.
“We were together and there was a lot of experience in the team and great talent like a lot of great players.”
“I have the same in this group, it’s not fully what I’m looking for if you are comparing to 1994.”
“In 1994, spirit was very high, we don’t care where the team is coming from, we know if we go out there we are going to win this game.”
“The mentality was very strong, here we are building that, trying to build in the same spirit and once we get our spirit, trust me, we can be stronger than 1994.”
Captain Joseph Yobo said Nigeria can surprise their doubters with a youthful squad.
“It’s going to be my third World Cup, and I’m not just here to participate,” Yobo said.
“We know it’s not going to be easy, in the previous World Cups we haven’t done very well.”
“We have our head coach here, we are current African champions, we just want continuity.”
“We did very well, now we are here we have a lot of young players as well but very talented so people are going to be surprised.”