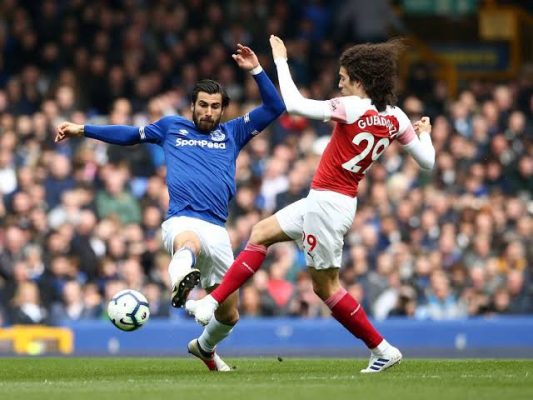 Everton dim the hope of Arsenal of getting to top-four finish in the English Premier League (EPL) with a last minute goal by Everton’s captain, Phil Jagielka.

The veteran defender scored the winner in a dominant 1-0 victory at Goodison Park today, Sunday.

Jagielka, who was brought into the team for a rare appearance after Michael Keane had to withdraw in the warm-up through illness, scored after 10 minutes. His goal earned his side well-deserved third straight league win.

It marked a significant setback for a disappointing Arsenal, who remain fourth in the table but missed an opportunity to leap ahead of their third-placed north London rivals Tottenham Hotspur.

Unai Emery’s side stay on 63 points, one behind Spurs, level with fifth-placed Chelsea and two clear of Manchester United in an increasingly tight battle for the UEFA Champions League berths.

He became the oldest goalscorer in the league this season at 36 years 233 days when he poked home his finish after Arsenal failed to clear Lucas Digne’s long throw.

The ball had fallen kindly after Dominic Calvert-Lewin got the final touch on to him in the aerial battle, allowing Jagielka to score his first league goal in two years.

His goal signalled a hungry and aggressive display from Everton who, while moving up to ninth on 46 points, could have won far more convincingly.

That is if Gylfi Sigurdsson and Richarlison had converted any of the side’s 23 attempts on goal.

“We got one goal but could have scored a few more,” added Jagielka.

He earned special praise from delighted Everton manager Marco Silva, who said: “He was to start on the bench, but showed how he is a good professional and prepares himself for what the coach and team needs.

“He is always ready to help the team.”

Arsenal, who have conceded at least one goal in every league away match this season, came closest with one curling second-half effort from Henrikh Mkhitaryan.

But they were outplayed and outfought by Silva’s team.

They had only two attempts on target in the whole match.

And, with Mesut Ozil failing to offer much inspiration as captain for the day, they endured one of their more frustrating lack lustre away days.

Arsenal’s frustration became obvious when the two managers were involved in a brief confrontation in the second half.

“The football is emotional. He wants the best for his team. I want the best for mine. At the end we spoke together and everything is normal,” said Silva.

Arsenal boss Emery felt his team would have to rebound swiftly as they prepared to face Napoli in a UEFA Europa League quarter-final first leg on Thursday.

“It was not a good result today but we are still fourth,” said the Spaniard. “We lost and we need to get up quickly and find the next step.”