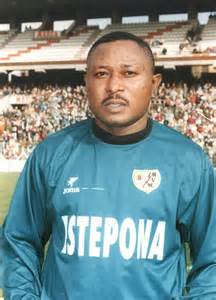 Former Super Eagles goalkeeper, Wilfred Agbonivbare is dea. He died in the early hours of today’s morning after battling cancer for a long spell.

The defunct New Nigeria Bank of Benin former shot stopper had been receiving treatment in the United States until he was asked to return to his home in Spain about three months ago.

Madrid based side, Rayo Vallecano, where he plied his trade in the early 90s displayed a banner stating “Forza Wilfred” (Go on Wilfred) during their 3-1 loss to city rivals Atletico Madrid at the weekend.

Agbonavbare played for New Nigerian Bank FC and BCC Lions OF Gboko before he moved to Spain in 1990 where he would spend the rest of his career, starting with Rayo Vallecano in Segunda División.

In his second season with the lesser known Madrid team Agbonavbare appeared in all 38 league games (3,332 minutes of action, 27 goals conceded, second-best in the competition) as the club finished second and made a return to the La Liga after two years of absence.

He continued to be first-choice in the following years, contributing with 31 matches to another top flight promotion in 1995. [myad]