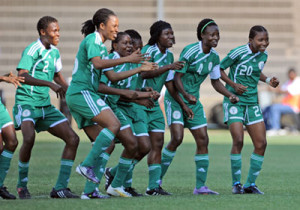 President Goodluck Jonathan personally visited members of the Nigerian national under-20 women’s football team, the Falconets with a tall order that they should beat their German counterparts in tomorrow’s final of the 2014 FIFA under-20 women’s World Cup in Canada.
The President promised them in return, a hero’s welcome and presidential treatment when they return to Nigeria after the tournament.
President Jonathan who is currently on a private visit to Germany was personaly at the Falconets’ base in Montreal at about 3.15pm Nigerian time today and spoke with the captain of the team, Patience Okaeme; top scorer, Asisat Oshoala; Assistant Captain, Deborah Okoye; Courtney Dike, Uchechi Sunday, the delegation leader, Chief Felix Anyansi Agwu, Head Coach Peter Dedevbo and other members of his team.
The President who commended the players for getting to the finals of the tournament once again, urged them to do their best to exceed their 2010 second place finish by overcoming the German team on Sunday and bringing greater glory, pride and joy to soccer-loving Nigerians.
“You have done very well by getting to the final. I urge you to crown your efforts with ultimate victory tomorrow by playing with the greatest possible artistry, discipline, determination and patriotic zeal.
“I look forward to receiving you at the Presidential Villa with the winners’ trophy and you can be assured of the immense gratitude of the Federal Government and the very appreciative people of Nigeria.” President Jonathan assured the Falconets that although, because of time difference, it will be very late night in Germany by the time the final begins in Montreal, he will stay up to watch the game with his aides and join millions of other Nigerians at home and across the world in cheering  them to victory. [myad]