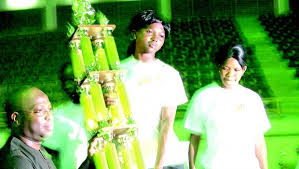 A top ranked Lagos State table tennis player, Fatimo Bello has said that she is preparing fully to be part of the Commonwealth game coming up in Glasgow, Scotland on July 23. The game will last up to August 3.

Fatimo, who has just returned from a two-year ban by the Nigeria Table Tennis Federation (NTTF) said: “I will strive hard at the trials for the Commonwealth Games in Glasgow to be sure I am part of the country’s representatives.

“I have participated in various international competitions but not the Commonwealth Games. So, this is an opportunity for me to accomplish my target. I know the trials will be highly competitive because of the calibre of players that will be on parade and that is the reason I’m doubling my effort in training to be successful.”

Fatimo who won the women’s singles event at the 2012 Asoju-Oba Table Tennis tournament said that participating in the Nigeria Open Challenge came handy for players’ preparation for the Commonwealth Games.

“This competition is coming at a period when we are preparing for a major Games; my joy is that many foreign countries are participating which will help us to hone our skills.”

Fatimo was banned for dual registration with Delta and Lagos states in the women’s singles event at the 18th National Sports Festival in Lagos in 2012.

The federation placed a two-year ban on her, preventing her from taking part in any competition it organized.

“Honestly, I missed out during my ban because I was not part of the competitions that took place. However, I did not allow the situation to affect my interest in the sport. I thank the NTTF for lifting the ban and giving me the opportunity to come back to the table tennis family. I have learnt my lessons and will move forward.” [myad]