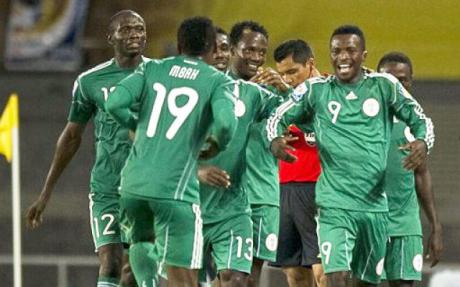 Nigeria has now qualified for this year’s FIFA Under-20 World Cup which begins on May 30 in New Zealand. They trounced their Congolese opponents today in Senegal by 4-1 in their second game at the ongoing Africa U20 championship.
The Flying Eagles started in brisk fashion and almost opened the scoring after just three minutes at Stade Léopold Sédar Senghor, Dakar.
Nigeria captain, Musa Muhammed stormed down the right and delivered a dangerous cross which was deflected towards a grateful Pavelh Ndzila in goal for the Congolese.
The Flying Eagles did not have to wait too long to celebrate their first goal though as Ifeanyi Matthew latched on a Bernard Bulbwa pass to slot home past Ndzila on five minutes.
The Nigerians could smell blood and pressed for a second goal which they almost got on seven minutes.
Matthew who was causing all sorts of problems for the opposition early on, got behind the Congolese defence but his goal bound effort was beaten away for a corner in exemplary fashion by Ndzila who was working very hard to earn his stripes.
A minute later, Ndzila had to be alert again to punch away a Mohammed free kick from the right.
Nigeria’s two-goal hero from the first game against Senegal, Taiwo Awoniyi burst into life in the 14th minute when his brilliant pass to Matthew completely carved the Congo defence open.
The striker however fluffed his lines and dragged his shot wide off the goal.
The intensity of the game dropped rather dramatically as Nigeria opted to boss possession and build deliberately while the Congolese defended in numbers and waited for their chance on the break.
On 26 minutes, the game changed dramatically with the sending off of Nigeria’s goalkeeper, Joshua Enaholo who simply had to go after fouling Constantin Bakaki who was honing in on goal.
The dramatic sending off occurred just moments after Nigeria almost made it 2-0 but were again denied by the impeccable Ndzila.
Congo sensed their chance and poured forward in numbers in search of the equalizer but made the fatal error of leaving spaces unmanned at the rear.
They paid the ultimate penalty as Nigeria launched a devastating counter attack after a failed Congo attack just after the half hour.
In living up to the rather unpredictable nature of the game, the Nigerians won a penalty on 33 minutes after Grace Miguel Itoua felled Awoniyi in the Congo penalty area.
Nigeria’s skipper, Muhammed, an individual with nerves of steel, was never going to miss from 12 yards and duly put the Flying 2-0 up with an unerring penalty converted with frightening force.
Nigeria’s numerical disadvantage was however surreptitiously creating spaces at the back and Congo looked to exploit.
In the 37th minute, Hardy Binguila’s curling shot appeared to be heading for the top left hand corner but was beaten away for a corner by Nigeria’s substitute goalkeeper, Olorunleke Ojo.
Congo knew they had to begin the second half in positive fashion and did just that, mustering the first goal attempt but Hardy Binguila’s effort just 40 seconds after the restart was wild and off target.
They continued to attack ceaselessly and on 49 minutes, Dorvel Dibekou Silvere delivered a precise cross which Ganvoula Mboussy headed towards the unmarked Deldy Muriel Goyi in the Nigeria box.
Goyi’s unconventional acrobatic effort was however saved by Ojo.
This Nigerian side is however built on attacking principles and on 51 minutes, they really should have made the score 3-0 but Awoniyi’s free header after he was teed up by the indefatigable Muhammed was miserable at best.
Three minutes later, Congo were again made to pay for attacking without minding their rear as Cosme Andrely Atoni fouled Awoniyi in the box to gift Nigeria a second penalty of the night.
Muhammed stepped up and the result was never in doubt as Ndzila was again beaten in comprehensive fashion from 12 yards.
Congo were however not going down without a fight and on 57 minutes, Silvere Ganvoula Mboussy fired a fearsome drive which was deflected away for a corner.
Nigeria however failed for the second successive game, failed to keep a clean sheet as criminal defending allowed Congo pull a goal back on 63 minutes.
Faria Jobel Ondongo was allowed time and space to cross from the right and the unmarked Mboussy smacked home a volley from eight yards.
Nigeria looked for the instant response and on 65 minutes, Abdullahi Mustapha crossed from the left for Awoniyi to head goal wards but this time, was outstanding with a brilliant save.
The Flying Eagles should have scored a fourth and completely killed off the Congolese fight back on 77 minutes but the onrushing Abdullahi shot well wide after been played through by Matthew’s deft pass.
Awoniyi had been full of running, pace and penetration all evening and he saved the best for last with the game’s best goal on 87 minutes.
He received a long range pass from Matthew, turned his marker, Antoni inside out before firing an unstoppable rocket past Ndzila to send the Nigerian supporters in the stadium into fits of hysteria.
Awoniyi almost completed his brace in added time but watched in frustration as his volley flew just wide off Ndzila’s left hand post.
Nigeria will now face the Ivory Coast in their final preliminary game on Saturday knowing that if they avoid defeat at the Stade Caroline Faye, M’Bour, they will finish as winners of Group A.
[myad]