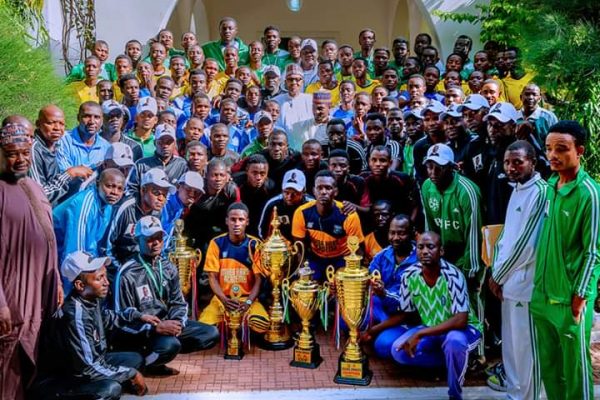 President Muhammadu Buhari has recommended sports of different kinds to both the young men and women as well and old people for the purpose of attaining good health, apart from also generating incomes and promoting healthy local and global relationships as well as ensuring unity.

Speaking today, August 16 when he received in audience in his Daura country home, Katsina State, organizers of the Muhammadu Buhari Cup Competition and some soccer teams, the President said: “I want the younger generation of our population to take part in sports so as to keep away from mischief and lawlessness.”

“Sports provide jobs opportunities. It is also a business from which you can earn respectable incomes.”

The President said that those who compete and excel at state and zones will eventually rise into national reckoning with focus and determination.

See also:  How Courts, INEC Cheated Us And We Bore The Pains - APC Boss,  Oshiomhole

The President commended organizers of the competition for maintaining unity among the youths in the Emirate, adding that by keeping the young people positively engaged, sporting activities also protect them from negative influences.

The Secretary of the Local Organizing Committee of the competition, Malam Aliyu Bello told the President that before introduction of various cup competitions, young people in the Emirate were contending with idleness, lawlessness and in some cases, drugs abuse.

He said revival of sporting events in the state by Alhaji Sani Abu had brought a decline in negative activities.

The Director of Sports in Katsina State, Nalado Iro Kankia, assured the President that Governor Aminu Bello Masari’s administration will continue to provide facilities and opportunities for promotion of sports.

The Muhammadu Buhari Cup Competition is held annually in Daura Emirate to encourage youths to develop interest in sporting careers and enhance their skills.