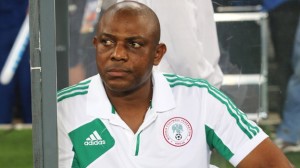 France national team, this evening, sent Super Eagles of Nigeria out of the ongoing World Cup tournament in Brazil. France handed down two unreplied goals to Super Eagels to sail to the quarter-finals of the tournament.
An otherwise excellent display in the Round of 16 showdown against European power France at the Estadio Nacional, Brasilia, ended in a heartbreaking loss.
Juventus star Pogba made the key breakthrough for France 11 minutes from time, punishing a rare mistake by Nigeria goalkeeper Vincent Enyeama.
Then in the closing minutes, a low cross from Mathieu Valbuena was turned in by Yobo as he came under pressure from Antoine Griezmann.
Paul Pogba of France scores his team’s first goal on a header past goalkeeper Vincent Enyeama of Nigeria during the 2014 FIFA World Cup Brazil Round of 16 match between France and Nigeria at Estadio Nacional on June 30, 2014 in Brasilia, Brazil. (FIFA)
Paul Pogba of France scores his team’s first goal on a header past goalkeeper Vincent Enyeama of Nigeria during the 2014 FIFA World Cup Brazil Round of 16 match between France and Nigeria at Estadio Nacional on June 30, 2014 in Brasilia, Brazil. (FIFA)
The victory ended Nigeria’s dream of reaching the quarter-finals for the first time and put France into a last eight meeting with either Germany or Algeria.
The defeat was hard on France-based Nigeria keeper Enyeama, who had kept Les Bleus at bay with a series of fine saves.
But the win was no less than Didier Deschamps’s’ France deserved after dominating the contest and enjoying the better of the chances throughout.
France will face the winner of Monday’s other game, between Algeria and Germany, in Rio de Janeiro on Friday.
Germany have played Algeria twice — at the World Cup in 1982 and in a 1964 friendly — and lost both games, but it is Vahid Halilhodzic’s Algeria who have revenge on their mind.
The Desert Foxes have “not forgotten” 1982; when West Germany lost 2-1 to Algeria and then played out a 1-0 win over Austria that ensured the European neighbours qualified for the second round. The game has gone down in football history as “The Shame of Gijon”, after the Spanish city where it was played.
Algerian midfielder Hassan Yebda says the north Africans are equally interested in claiming a major scalp.
“We are a little bit optimistic,” said the Udinese midfielder cautiously.
“Germany are the best team here, we need the perfect game and it would be a sensation if we can reach the quarter-finals.”
Loew rejects talk of revenge as barely anyone in the German squad was even born when the shame game was played. His side, minus Lukas Podolski who has a thigh injury, will start as favourites but he has also warned them against complacency.
“Anyone who thinks that an easy opponent is waiting for us in the next round is making an enormous mistake,” said Loew after Germany finished as Group G winners.
Team captain Philipp Lahm has also said Germany must prove on the field that they are worthy of the reputation of being Europe’s best hope at the World Cup.
“We have had great teams in the past and this squad has great potential, but we have to take it a round at a time and play aggressively.”
The Algeria match has put authorities in France on alert, following violence which erupted after the north Africans qualification for the second round.
Algerians make up France’s largest immigrant group, with close to two million people, and many hold dual citizenship.
Off the pitch on Monday, Uruguay’s disgraced striker Luis Suarez loomed back into view after being kicked out of the tournament last week for biting Italy defender Giorgio Chiellini
After vehement public denials of wrongdoing, and claiming to FIFA disciplinary chiefs the incident was an accident, Suarez issued a carefully worded statement of apology on Twitter.
“I apologise to Giorgio Chiellini and the entire football family,” Suarez said, acknowledging for the first time that there was “a bite.
“I vow to the public there will never again be another incident like.”
Elsewhere, Arjen Robben caused a storm when he apparently told Dutch television he dived during the controversial 2-1 win over Mexico on Sunday — but not for the penalty awarded in time added on.
However, the Dutch football federation issued a strongly-worded statement saying the media had mis-interpreted Robben and the Bayern Munich star had said he’d fallen not dived too easily.
FIFA also said they would not be taking any action.