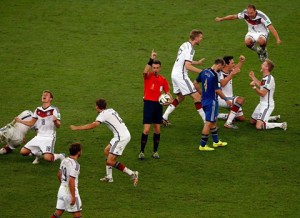 German national team, Sunday night, beat hard-fighting Argentina by a lone goal. The goal came about seven minutes to go in the extra time after goaless draw at full time.
Thus for the fourth time in their illustrious history, lifted the World Cup through serious long plan, beginning from 2002.
The deciding goal came in 113th minute from Mario Gotze with classic positioning planning and shot in front of the goal mouth.
Lionel Messi’s goal in the first half of the game was disallowed as linesman had already raised his flag for off-side.
However,  the two team showed class in what appeared clearly as exhilarating encounter at the Estadio do Maracana.
The substitute scored a brilliant goal more than worthy of the World Cup title when it looked like we were heading for penalties.
What a moment for the 22-year-old.
Germany become the first European team to ever win the World Cup on South American soil.
The best team at the tournament has been crowned champions, just the way it should be.