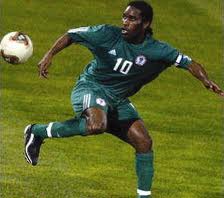 Nigerian football icon, Austin ‘Jay Jay’ Okocha has vowed that his daughter will not embark on a career in professional football.

He said that his son is now focusing on his education and will play football at the right time. He mentioned six football stars of all time he admired which included Germany goalkeeper Oliver Khan, ex Super Eagles defenders Uche Okechukwu, Taribo West, Austin Eguavoen and Brazil’s Ronaldinho. Late Nigerian striker Rashidi Yekini, who scored Nigeria’s first-ever goal in a World Cup in 1994 also made his list.

Jay Jay didn’t leave out the Manager who gave him his first chance at the Eintracht Frankfurt, naming Stefanovic as his favorite manager of all time.

When asked about his recent appointment as a #ShineOnNigeria ambassador, he said: ‘Being a passionate football fan is not easy because I am in that position now, your team’s performance can make or break your day.

Thank you to Star Lager for recognizing Nigerian football fans and giving us a voice to support our team.’ Okocha, who made his official debut for Nigeria in the 1994 FIFA World Cup qualifier, retired in 2008. [myad]