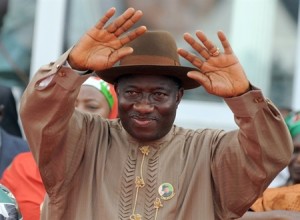 President Goodluck Jonathan has said that he looked forward to receiving and honouring members of the Nigerian team on their sterling performance at the 2014 Commonwealth Games which ended in Glasgow, Scotland at the weekend.
He gave assurance, in a statement by his special adviser on media and publicity, Dr. Reuben Abati, that he will receive the medal winners and their coaches at the Presidential Aso Villa, Abuja at a date to be announced.
President Jonathan was particularly elated by accomplishment of Blessing Okagbare who dominated the female sprint events, and other athletes who won medals for the country at the games.
The President believes that the athletes’ very impressive performance at the games which resulted in Nigeria ranking 8th out of 71 participating countries, is a further demonstration of the indomitable spirit of Nigerians and the great heights they can attain with hard work, commitment, dedication, courage and patriotism.
He assures the athletes and their handlers that his Administration will continue to do its best ​to encourage them and support sports development in the country.  [myad]