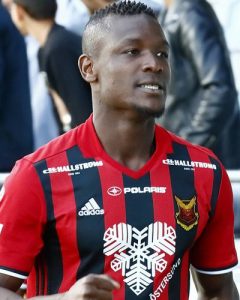 The center forward has penned a deal tying him to the The Blues of the Capital until 2021.

Prior to agreeing terms with Esteghlal F.C, he turned out for Scandinavian teams östers IF, Viborg FF and östersunds FK.

He saw his stock rise last season after playing a key role in östersunds FK’s qualification to the knock out rounds of the Europa League, playing 12 matches and scoring 2 goals.

Esteghlal F.C are managed by German Winfried Schäfer who was in the dugout when Cameroon won the Africa Cup of Nations in 2002.

Their next game in the league is against Tractor Sazi on Friday, August 10. [myad]