Home SPORTS Keshi Goes Haywire, Says Amaju Is A Liar “Who Does He Think... 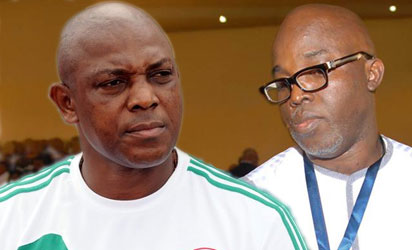 Chief Coach of Nigeria’s Super Eagles, Stephen Keshi is obviously angry with the President of the Nigeria Football Federation (NFF), Amaju Pinnick whom he described as a liar by saying that the NFF has settled all his entitlements.

Keshi, who just missed the coaching appointment with the Burkina Faso national team, the Burkinabe said: “I will let Nigerians know what is happening. I don’t understand, how can Amaju, who says he is the president of Nigerian football, be lying to Nigerians? Is that how he wants to run Nigeria Football?

“I heard also Amaju said he has paid us everything, that he is not owing us. It is a lie, big-time lie. He is owing us two months plus our winning bonus for the game against Sudan,” said the coach.

“What is he talking about? Because I am keeping quiet, I don’t want to talk? Now if they want me to talk, I will start talking and let Nigerians know what is happening.”

Keshi made it clear that NFF is not doing him a favour by renewing his contract as Eagles head coach, adding that he is capable of walking away from the post.

“The NFF thinks without Nigerian football there is no other place to coach. This is a very wrong assumption,” fired Keshi in a report on Supersport.com.

“I love to coach Nigeria, but they think they are doing us a favour because that is the message – that they are doing us a favour to appoint a Nigeria coach. But that is not true, if they don’t want us, we would go somewhere else and coach.”
Pinnick said last week that Keshi could resume as Nigeria coach if he agrees on a new deal so long as he is prepared to abide by the condition of the new contract.

However,  Keshi said that he has unpaid two months salaries  as well as the win bonus for the 3-1 home win over Sudan in a 2015 AFCON qualifier from his previous contract as Eagles boss.

“They are owing us money they have not paid and instead of him to say okay there is no money yet or something, he is telling everyone he has paid everything,” stressed Keshi. [myad]