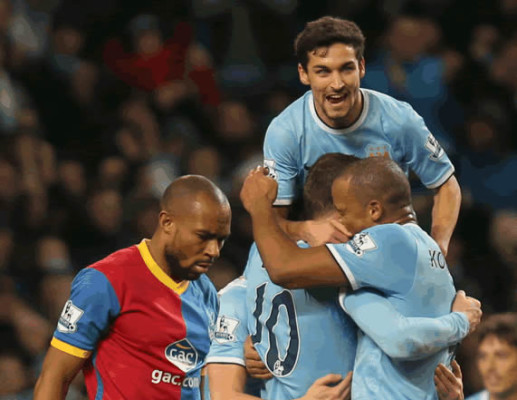 Manchester City took full advantage of a surprise slip-up from Premier League leaders Chelsea with a 5-0 thrashing of a woeful Newcastle United on Saturday.

The reigning champions received a welcome boost prior to kick-off at the Etihad Stadium as Chelsea gave up a lead to draw 1-1 at home to lowly Burnley.

Vurnon Anita soon provided a further lift to City, clumsily conceding a penalty inside 30 seconds to hand Sergio Aguero the chance to open the scoring from the spot, and Newcastle’s defensive shortcomings were ruthlessly exposed thereafter, as Manuel Pellegrini’s men – with the influential Yaya Toure back in their ranks – ran riot.

Samir Nasri and Edin Dzeko added further goals in the opening quarter of the game, while David Silva scored twice in quick succession to make it 5-0 after just 53 minutes.

That gave Pellegrini the luxury of handing Aguero and Silva an early rest ahead of Tuesday’s Champions League tie with Barcelona, with Wilfried Bony introduced off the bench for his debut.

The hosts coasted through the remainder of the contest, against a side beaten 4-0 on their previous two league visits to the Etihad, and they now sit five points behind Chelsea with 12 rounds of matches remaining.

Toure and Bony – a January arrival from Swansea City – were both available following their Africa Cup of Nations success with the Ivory Coast, but James Milner missed out through injury.

The only change to Newcastle’s team saw Remy Cabella replaced by Anita and the Dutch midfielder was quick to mark his recall with a costly error, as he mis-controlled a pass from Mike Williamson before upending Dzeko in the box.

Aguero calmly converted the resulting penalty, passing the ball to Tim Krul’s left with the goalkeeper completely wrong-footed, and City were soon in complete control.

Although Daryl Janmaat went close with a fine effort from distance for Newcastle, the visitors fell further behind on 12 minutes when a pass from Dzeko deflected into the path of Nasri, who took a touch around a defender and fired a shot high into the net.

City pulled further clear nine minutes later with a third goal that oozed class. A sublime ball over the top from Silva picked out Dzeko and the striker controlled expertly with his chest before beating Krul with a half-volley.

Newcastle, who replaced Anita with Mehdi Abeid at the start of the second half, almost pulled a goal back but Joe Hart made a fine one-handed stop to keep out a powerful volley from Papiss Cisse that took a deflection off Vincent Kompany.

Any hope of an unlikely fightback was snuffed out in the 51st minute, however, as Aguero charged infield from the left and found Nasri, who squared a pass for the unmarked Silva to finish with typical style.

The home fans had barely finished celebrating by the time Silva struck again with a sweeping first-time shot after Aguero had chested down a lofted pass from Toure.

Silva and Aguero were duly withdrawn and Bony was only denied a debut goal by Krul’s outstretched left leg as City eased through the closing stages, completing the ideal preparation for Barca’s visit on Tuesday when a sterner test will surely await. [myad]